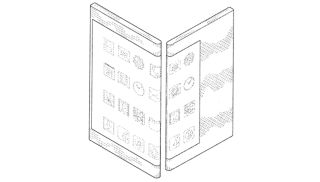 Spotted by Lets Go Digital!, Samsung has patented a new design for a screen that folds completely around the front of a smartphone and onto the back.

While the patent was published today in the database of the USPTO (United States Patent and Trademark Office), the request was put in as early as September of last year.

There is little explanatory text, but it's clear the touchscreen display would run around the back of the smartphone - on which app icons could be displayed.

It's unclear whether we will see this appear in Samsung's next batch of smartphones, but with the industry-wide surge of bezel-less designs it's clear that the Korean company will need something new for the future of its phone designs.

And, of course, this may not even reach the smartphone stage. Samsung has also been rumoured to be making a bendable phone that could launch in 2018, so it's possible this will be the manufacturer's priority.

It wouldn't be the first time we've seen flexible tech - it appeared on the Samsung Galaxy S7 Edge and the LG G Flex phones, which curve at the sides, while HTC's U11 boasts a squeezable design.

Still, if a curved phone means stronger glass (as it would be difficult to put a case around it) and, therefore, crack-proof screens, we're all for it.