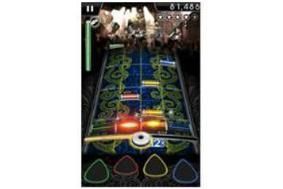 We now know it will ship with 20 songs, all of which will be familiar to dedicated Rock Band artistes who've mastered the genre on other platforms.

Players will be able to pick one of four band roles: bass, guitar, drums and vocals. All four feature screen tapping and finger action, including the vocals, which replaces the humiliation of public singing with beat matching.

EA has confirmed there'll be a four-way multiplayer over Bluetooth and a music store offering more merchandise. Can't wait to see all our iPhone-owning colleagues doing their stuff.