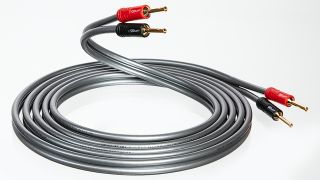 We may live in a world that's increasingly wireless this and untethered that, but the humble analogue cable still plays a vital role in connecting traditional hi-fi to ensure music playback sounds its very best.

QED knows a thing or two about what's required from speaker cables and interconnects to preserve an audio signal – it's been behind many a What Hi-Fi? Award winner and five-star cable, after all, three of which are now being replaced by new and improved versions expected in October.

Up first: the QED Reference XT40i speaker cable. An update to the XT40, winner of the 'Best speaker cable' What Hi-Fi? Award in 2014, it builds on its predecessor’s design with a newly developed Air Gap dielectric construction. QED claims this reduces the cable’s dissipation factor and capacitance by half, promising a wider, more musical and bass-tight performance. Also in the name of improved sound quality, the XT40i utilises QED’s proprietary X-Tube technology, which was first introduced in the company’s Award-winning Silver Anniversary XT cables over a decade ago.

Its 99.999 per cent oxygen-free copper build offers improved conductivity over standard copper, too, while its significant 4.0mm² cross-sectional area has been chosen to lower loop resistance.

The QED XT25 Bi-Wire, meanwhile, is, as its name suggests, a bi-wire version of QED’s XT25 speaker cable. Priced £12/m, it brings the company’s aforementioned X-Tube cable technology and X-Quad geometry (which lowers inductance in an effort to reveal more detail) to an affordable bi-wire or bi-amp speaker cable.

Like the XT40i, it has a 99.999 per cent Oxygen-free copper construction, as well as a low density Polyethylene jacket whose purpose it to minimise electrical energy loss in the cable compared with cheaper PVC alternatives.

Last but not least if you’re in the market for an analogue interconnect, the QED Performance Audio 40i, is a “complete overhaul” of the five-star Performance Audio 40, with improvements spanning most areas of its construction. A QED first, it uses Solid Core Complementary Conductors, which supposedly reduce capacitance by a quarter compared to the original model, resulting in a larger soundstage.