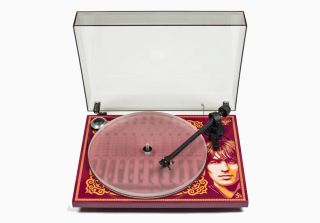 George Harrison fans are in for a treat next month. To celebrate what would have been the late Beatles' 74th birthday, a whole load of commemorative gear is launching, including a vinyl box set of his albums and an extended version of his book. But taking pride of place is this limited edition George Harrison turntable from Pro-Ject.

Called the George Harrison Essential III, it was designed by California-based design agency Studio Number One, and is based on a 2014 art-print litograph designed for the Harrisons by artist Shepard Fairey. It's limited to 2,500 units worldwide.

And what better to play on your George Harrison turntable than all 12 of Harrison's studio albums, plus his Live in Japan album and a 12in picture disc singles of When We Was Fab and Got My Mind Set on You?

For the first time, they're all collected in a George Harrison box set.

Each record features an exact replica of the original release's tracklisting and artwork, and each is 180g heavyweight vinyl housed in a high-quality two-piece rigid slipcase box.

The re-masters were taken from the original analogue tapes, and were cut at the legendary Capitol Studios in LA.

Finally, Harrison's autobiography I Me Mine is also being reissued. Originally published in 1980, it recounts his upbringing in Liverpool, early Beatlemania and Harrison's spirituality and philosophy. This is an extended version, running to a mammoth 632 pages, and includes song lyrics and previously unpublished photographs.

All three items will ship on 24th February, which would have been Harrison's 74th birthday.