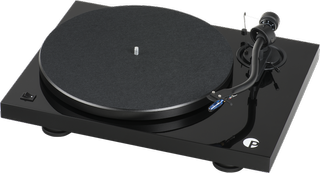 Towards the end of 2017 Pro-Ject not only opened its new headquarters in Mistelbach (a small Austrian town north of Vienna), but also expanded its turntable factory in the Czech Republic.

And, like teens commemorating their 18th birthday with a tattoo, the company decided to physically mark the occasion – with a new logo.

The Debut III S Audiophile – the latest version of the Debut model first introduced in the late ‘90s – is the first product to sport it. The ‘P’ logo can be seen on the plinth as well as the supplied dust cover.

Aesthetics aside, it’s very much the Debut design we’ve come to know and love: the same belt-drive motor, same AC generator and the same 12in platter. But as the ‘A’ word in the product name suggests, it also boasts advanced features.

It’s the first Debut model to feature an S-shaped tonearm (as seen on the company’s RPM1 Carbon and 2Xperience SB decks), and the brand’s first turntable to feature a new, specially designed Ortofon cartridge.

The Pick-IT 25 A moving magnet cartridge is based on Ortofon’s OM series, but aims to improve performance by utilising silver spools in its generator system.

Whether this refreshed package has what it takes to snatch the crown from the Rega Planar 1 remains to be heard. But for now you can, at least, be sure it costs £325 and is available now in glossy black or white finishes.