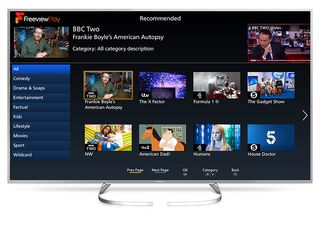 Panasonic has today announced a smorgasborg of LED TVs at a launch event in Frankfurt. The company's latest generation of LED products features "enhanced LED lighting and the latest LCD panels", as well as support for 4K and HDR pictures.

HDR content can be played on these TVs through streaming services like Netflix, Amazon Prime and YouTube, as well as from Ultra HD Blu-rays. Hybrid Log-Gamma support will also be made available later this year.

In terms of features, these televisions will have a Cinema Display mode, which Panasonic say uses "enhanced local dimming for inky blacks with subtle gradations, and outstanding levels of brightness".

Panasonic has updated its interface too, adding in a favourites folders for multiple users, a My App button on the remote that can be customised for faster access to selected content, and a revamped Media Player app that supports 4K HDR10 and HLG content playback.

MORE: LG and Sony confirm no curved TVs for 2017