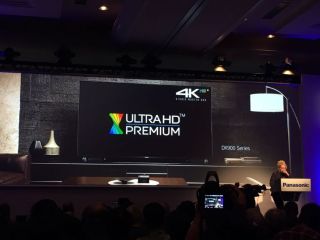 Panasonic's CES 2016 press conference may have involved a lot of talk about the company's deep involvement with the infrastructure of an entire city (Denver, Colorado) but also included several extremely interesting home entertainment stories. Here are five key points from Panasonic at CES.

There's at least one 4K Ultra HD Blu-ray player - the DMP-UB900 - coming to Europe in the spring of 2016. Pricing is yet to be confirmed, but we're told it will be shy of 1000 euros. We'll keep an eye out for the full specs of the player (not to mention some discs).

MORE: Panasonic's 4K Blu-ray player to go on sale in Europe this spring

Panasonic's range of 4K TVs (currently one of the widest on the market) will get wider still in 2016, with the introduction of the DX900 series of UHD Premium-certified LED TVs. UHD Premium is a recently devised standard for HDR 4K from the UHD Alliance.

3. Meet the new boss - hopefully the same as the old boss

The Technics Grand Class range of stereo separates (unveiled at IFA in Berlin last September) now officially includes the SL-1200G direct-drive turntable, an updated reworking of a genuine hi-fi (and DJ) classic. And it looks rather lovely.

5. The place is Rio and it will look grand

And lastly, there's the exciting news that Panasonic will be providing more than 100 HD projectors for the opening and closing ceremonies at the 2016 Olympic Games in Rio. In 4K, we hope...