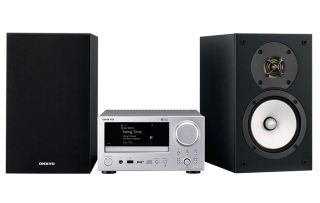 Starting from the top - and, at £470, the most expensive - the CS-N775D aims to produce a "class-beating frequency response, flat linearity, and analog-like fluency". How? Well, according to Onkyo, with a new three-state amplifier design that adds a 'neutral' position to the 'on' and 'off' modes of conventional amplifiers. The bottom line is that Onkyo say this will "smoothly shape" a waveform in a similar way to an analogue amplifier.

Users can stream music from Chromecast, AirPlay, Bluetooth and DTS Play-Fi devices, while the Onkyo also has FM and DAB+ radios, a CD player and coaxial and optical digital audio inputs. There's a 3.5mm input, too. A USB input also allows for the connection of a portable HDD and there's support for 192/24-bit hi-res files and DSD audio.

Next is the £400 CS-N575D, which has all of the connectivity as the CS-N775D - barring AirPlay - but can only handle 96 kHz/24-bit audio rather than 192 kHz/24-bit. The system comes with slightly smaller speakers and a less powerful amplifier than the top model.

Finally comes the CS-375D, priced at £270. This mini-system has coaxial and line-level inputs to connect to a television or media player, as well as FM and DAB+ stations, a CD player, and Bluetooth, but loses a lot of the other wireless functionality, such as Chromecast and DTS Play-Fi.

All three Onkyo systems will be available in September, in either a black or silver finish.

7 of the best horror films for sound