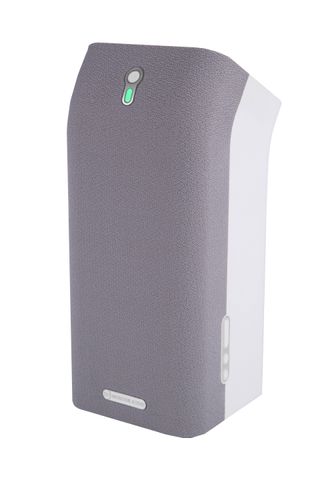 The device supports Apple AirPlay, aptX Bluetooth and DLNA, while Monitor Audio's proprietary Airstream Direct can also be found on board if you don't wish to stream via wi-fi.

If you're using its AirPlay capabilities, you'll be able to stream tunes saved in the AAC, ALAC and MP3 format. Meanwhile, Airstream Direct can support all three formats and a fourth – ALAC – for "higher quality streams".

We've already had our hands on a sample, so you can read our full review online now.

Non-iOS devices can also be hooked up to the Airstream S200 using its 3.5mm jack.

The gold dome tweeter is mounted centrally between the two 3in bass/mid drivers, but the baffle is slightly angled, which results in the bass/mid drivers firing off in opposite directions in an effort to increase the dispersion of the sound.

Monitor Audio's Airstream S200 is expected to go on sale shortly at a cost of £200. Click the link below to read our full review.