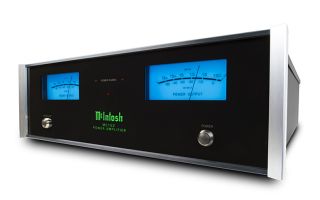 The MC152 is the company's smallest current solid state stereo amplifier and delivers 150 watts per channel. The next model up, the MC302 (previously the baby of the range), outputs twice that amount. By conventional standards the MC152 remains an imposing unit; it's 15 x 45 x 50 (HWD)cm in size and weighs in at a considerable 34 kg.

There's a choice of both balanced and single-ended inputs, and a look inside reveals the use of the company's trademark technologies, including autoformers in the output stage. On the outside the appearance is all McIntosh, with the company's distinctive blue power meters and black glass front panel grabbing our attention.

Two is better than one

Should the MC152 be a little weedy for you then we have no doubt McIntosh would like you to consider its other new arrival, the MC301. This 300-watt monobloc amplifier is built into the same-sized chassis as the junior unit but packs plenty more punch. It features similar circuit technology and input options as well as the ability to daisy-chain extra amplifiers should you need even more muscle.