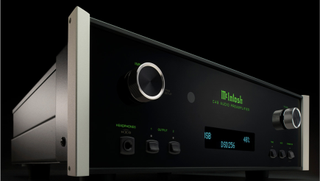 At a time when hi-fi equipment requires updating on a regular basis to accommodate the latest in musical tech, New York audio firm McIntosh has done the decent thing and released a preamplifier that promises to move with the times.

The latest of its eight-strong range of preamps, the McIntosh C49 comes fitted with its DA1 DAC module, but this can be replaced as newer technology (and potentially new digital formats) become available – an interesting proposal for the savvy, forward-thinking vinyl lover and music streamer.

With no fewer than 13 inputs, each can be given a user-friendly name for easy set-up, so you won't forget what you've put with what. In terms of analogue, there are two balanced, three unbalanced and two phono inputs – one with moving coil and one moving magnet, so the entire gamut of turntables is catered for.

Moving over to that DA1 module and the digital side, the C49 has six inputs: two coaxial, two optical, a USB and and an MCT input – McIntosh's unique digital connection, for use with McIntosh's MCT series of SACD/CD transports.

That upgradeable DA1 module is powered by an eight-channel, 32-bit DAC (run in Quad Balanced mode) to support hi-res audio, including DXD 384kHz and up to DSD256.

The preamp also offers fine-tuning of its bass and treble output via tone controls, and the C49 can be integrated into home cinema systems via the Home Theater Pass Through.

McIntosh’s High Drive headphone amplifier with Headphone Crossfeed Director (HXD®) is also included, should you find yourself listening solo late into the night.

The C49 is priced at £5,495 and will ship to the UK in June/July, while those in the US can expect to receive theirs in May.

McIntosh MPC500 will protect your hi-fi gear against lightning strikes