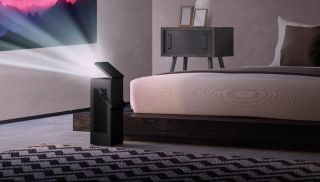 A few days before CES 2018 properly kicks off, LG is getting ahead of the news cycle by announcing its first 4K HDR projector: the HU80KA.

It doesn't look like a conventional projector. It sits upright like a pillar, a design that comes from its "mirrorless I-shaped engine". LG has also added some portability features, as there's a carry handle too. None of this will stop it being able to hang from your ceiling.

While we don't have specific dimensions, the HU80KA is roughly half the size of other 4K projectors - LG says it wanted to avoid how "heavy, expensive and difficult-to-install within the home" other products are. Apparently LG's engineers have been able to downsize the HU80KA without sacrificing image quality.

How true that might be remains to be seen.

The projector can create a 150in image with a brightness of 2500 lumens, which makes it the brightest projector LG has made. The 4K image is created through the same Expanded Pixel Resolution (XPR) technology found in other 4K projectors (like the Optoma UHD65), and it's likely this has allowed LG to circumvent the need for a native 4K chip.

There's no mention of price from LG yet, but we imagine the HU80KA will be in the £3000-or-so category that's the 4K projector sweet-spot at the moment. There's no word on whether the projector will support Dolby Vision.

It has two 7W speakers built-in, although we would always recommend pairing any projector with a suitable soundbar or external speakers.

The HU80KA has an optical output, HDMI and Bluetooth for audio, and also comes equipped with USB and Ethernet connections (alongside the expected HDMIs for video). It also supports keyboards and mice. It's running the webOS 3.5 smart TV interface, so we expect it to come with the same apps as available on LG's televisions, such as Netflix and Amazon Prime.