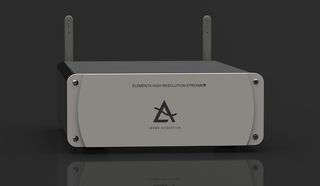 The compact Elements Streamer (£1095, pictured top) is based on the streaming module used in the company's Quasar streaming amplifier (£2995) and has built-in support for Tidal, Deezer, Qobuz and vTuner radio. Other means of playback are over DLNA, Spotify Connect, Dropbox and Microsoft Onedrive, and via USB input.

The new Stream IV, meanwhile, is the fourth incarnation of Leema’s streaming CD player, designed to accompany the Pulse IV amplifier. It marries many of the internals found in the Elements Streamer and, much to the delight of those clinging onto their shiny disc collection, also adds a CD player.

Availability for both new products has yet to be confirmed. As well as the previously-announced Pulse IV and Hydra II Anniversary Edition amplifiers, though, they're are making their world debuts at the Bristol Show, which kicks off tomorrow…