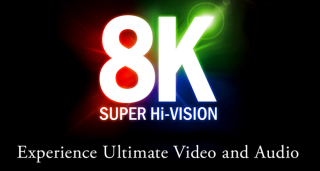 You may have just bought yourself a 4K TV, added an Ultra HD Blu-ray player and have just invested in Sky Q to get Ultra HD sports. The picture looks impressive doesn’t it? Well Japan clearly thinks differently because it’s been there, done that and got the 4K t-shirt, so the next thing on its agenda is 8K TV.

Japanese public broadcaster NHK is now broadcasting content in 8K, with a resolution of 7680 x 4320, 16 times the resolution of Full HD and four times that of 4K. NHK is calling it “Super Hi-Vision” and it also comes with 22.2-channel surround sound.

NHK has launched a satellite channel that transmits a mixture of 8K and 4K content, and hopes to be able to beam 8K TV signals into homes in time for the 2020 Tokyo Olympics.

The channel operates from 10am until 5pm, but will run for extended hours during the Rio Olympics, which start on Friday 5th August. Content is currently limited to the arts, sports, music and documentaries.

Of course, with a higher resolution, the number of obstacles between camera and TV that must be overcome increases. Cameras, mixers, recording equipment, monitors and various other studio gear has to be specially built to handle uncompressed 8K video in real time, when data rates can reach 100Gbps.

Fortunately, 8K isn’t new to NHK, as the broadcaster has been working on it for many years, and first demonstrated it in 2002. The live 8K transmissions can now be watched at several public viewing areas around Japan until consumer reception equipment becomes available.