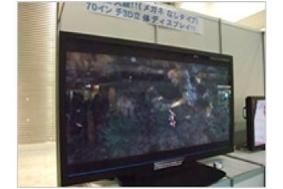 The giant LCD, which went on display at an exhibition at the annual flat panel display show in Tokyo, is made by NewSight (the website's in Japanese), and uses a parallax barrier over the display to create the 3D image.

This is a thin film cut with a series of vertical slits, ensuring that each eye sees a different set of pixels. In other words, it works rather like those old fresnel-lens 3D stills images.

The displays are designed for use in commercial applications such as advertising or museum displays, and are designed to allow eight different views of the same object simultaneously, allowing the 3D effect to be maintained over wider viewing angles.

To date such displays have been limited to much smaller sizes, such as those beginning to appear on Japanese mobile phones and similar devices.