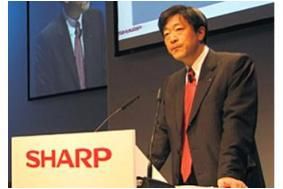 However, it won't be looking to take a majority stake in its foreign manufacturing partners.

That's a big change for the company, which has previously said it wanted to keep LCD development and manufacturing in Japan, to ensure quality control. In fact, it tried to keep manufacturing as close as possible to its Osaka head office, in order to foster close co-operation between R&D and production.

It says that it wants to focus on increasing licensing and other revenues from its technology, which it hopes will replace the income from sales of LCDs as its main source or revenue.

Worldwide manufacturing bases
It's thought Sharp will build a network of manufacturing bases around the world, by co-operating with local companies. And the policy will also extend to its solar cell business, which is Sharp's other major earner - it's already in talks with a major power company in Italy about local manufacturing of cells.

Sharp was the first company in the world to mass-produce LCD panels, but analysts fear that this move will impact on its revenue, as well creating the risk of 'technology leakage', as overseas companies learn more about its technology.