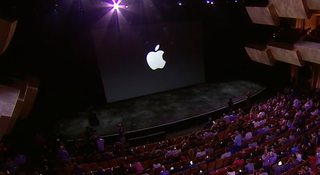 Apple iPhone 6 and iPhone 6 Plus are official

7.53pm U2's new album, Songs of Innocence, is going out for free to everyone with an iTunes account. "The largest album release of all time." Free for everyone via iTunes.

7.44pm Apple music announcement! Oh... It's just U2 performing at the launch event.

7.20pm You will need an iPhone to use the Apple Watch. In other news, we're guessing there won't be any more products announced now... So no iPods, iPads or Apple TV.

7.10pm Wow. A lot of focus on the Apple Watch, understandably for a new product category. There are 'his and hers' versions and three different models, Watch, Watch Edition and Watch Sport.

7.00pm "Apple Watch works seamlessly with iPhone and is also a comprehensive health and fitness device", offering "a breakthrough in interface design".

6.51pm ApplePay is launching in the US with Visa, MasterCard. "Fast, secure and private." Will be available in McDonald's, Whole Foods, Disney stores, Nike shops, Apple stores and more.

Online payments will also be available with 'one-touch check-out'.

6.49pm ApplePay built in to every iPhone 6 and iPhone 6 Plus, which have a NFC strip and Touch ID for security.

Take a picture of your card and it's logged securely by Apple so you can make one-touch payments. If your iPhone is lost or stolen you can use Find My iPhone to cancel your cards. Apple won't know what you bought, where or for how much...

6.41pm iOS 8 will be available as a free download from September 17th.

6.37pm Now we're on to features. iOS 8 and the fingerprint sensor are of course on board.

6.32pm A lot of talk about the new lens and sensor in the iPhone 6 iSight camera.

6.28pm Wi-Fi calling is a new feature for making high-quality calls when you're in a bad network reception area.

6.27pm New processor promises to be up to 25% faster CPU performance.

6.22pm The iPhone 6 Plus will play games in higher resolution than next generation consoles. Blimey.

6.18pm iPhone 6 and iPhone 6 Plus are powered by the Apple-designed A8 chip, promising performance that's 50 times faster than the original iPhone

The screens have 4.7in and 5.5in screens

These are the thinnest iPhones ever made

5.50pm It's T-Minus 10 minutes until the Apple event goes live. Tech and fashion industry press are in attendance and taking their seats...Stephen Fry's there too!

2pm Tim Cook, Apple CEO, has tweeted his excitement for the impending iPhone event: "Looking forward to a great day in Cupertino! Join us at 10am Pacific. #AppleLive" That's 6pm UK time, of course...

11am Apple has given over its website to a countdown timer to the big event. A notice on the Apple website promises, "Live video from our special event will be right here. And so will a whole lot more." We'd imagine you will need to be on an Apple iPhone, iPad or Mac, and using Apple's own Safari browser, to watch the live stream, as is normally the case.

Check out the Apple Events page for the live stream from the launch event.

With two new iPhones likely to be unveiled later today, and the company's first wearable device, it's likely to be a big day in Apple's history.

We'll be covering the event live right here, so make sure to keep checking back for the latest news. And we'll have our hands-on reviews of the new iPhones soon after the event finishes.

In the meantime, for all the latest rumours and predictions, head to our iPhone 6: release date, features, specs and rumours page.

What else can we expect to see from Cupertino? We've rounded up some of the most likely features and some of the suggestions from the What Hi-Fi? Facebook page. You can see them all here.

MORE: iPhone 6 launch: what we expect to see