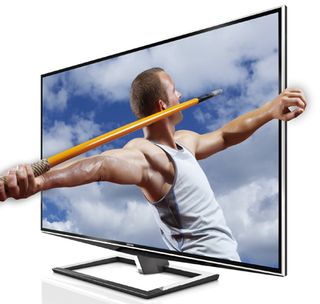 Well, it's what you tell us you've been waiting for, and the big news from Toshiba is that it will launch the world's first large-screen, glasses-free 3D TV in Germany this December.

Release dates in other European countries, including the UK, are still to be confirmed.

There's no price as yet – don't expect it to be cheap– but Toshiba claims its 55ZL2 will allow up to nine viewers to watch in 3D simultaneously without glasses, using built-in face-tracking and the firm's proprietary CEVO engine.

Using an array of lenticular lenses – a first in such a large screen – Toshiba's engineers say they have been able to calculate multiple viewing points from stereoscopic images.

The glasses-free 3D technology is based on the stereoscopic principle of simultaneously delivering a picture for the left eye and another one with a small offset for the right eye, which are then 'superimposed' on the viewer's brain to create the 3D effect.