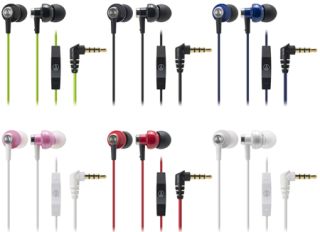 Audio-Technica is one of several companies here at IFA to recognise there's more to smartphones than just Apple. It's released a range of new earphones with in-line microphones and controls, with models aimed at Android and Sony Ericsson Xperia users as well as iPhone owners.

The ATH-CK400 in-ear range - pictured above in all its colourways - includes Apple and Sony Ericsson Xperia-specific designs plus an Android-friendly smartphone edition.

For those whom prefer less invasive in-ears, there's also an ATH-C505 range (see right) available in the same three editions, in an assortment of colours.

The company has also added new Solid Bass headphones to its line-up - with more new hi-fi focussed models still to come in 2011.

Apple iPhone/iPod/iPad remains the focus of the new Solid Bass models, which feature in-line controls for the Apple portables, along with - as their name suggests - a claimed richer sound with enhanced bass.

The ATH-CKS55 - replacement for the CKS550 - has a new aluminium look (in black or white), while fans of more traditional headphones now have the Audio-Technica ATH-WS55 to play with - black or red colourways.

UK pricing and availability for all the new Audio-Technica headphones has yet to be set, but we'll update you - and bring you reviews - as soon as possible.