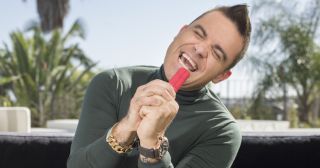 What do Robbie Williams, Alesha Dixon, Sheryl Crow and Stephen Fry all have in common? Apart from all being very entertaining to watch sing, each has backed Electric Jukebox, a streaming service and hardware product that aims to turn your television into a dedicated music player.

The Electric Jukebox TV stick plugs into your television's HDMI port and brings with it over 29 million songs. These songs are curated into channels based on genre, era, and mood, as well as having some channels made by the aformentioned celebrities.

For the first year, access to these songs comes free with the purchase price, which is £169. After the first year, it's a £52 per year subscription free (approximately £4 per month), nominally cheaper than Tidal, Apple Music, and Deezer.

If you cancel your subscription, Electric Jukebox will keep working but you'll hear ads, much like the free service provided by Spotify.

You control the Electric Jukebox through motion sensitive controls, or through a voice search function on the remote in the same way you might choose songs using an Amazon Echo.

Electric Jukebox say it aims to bring streaming to an "older generation...[that prefers] listening to music on the radio and their existing CD collection than on a smartphone or computer."

The company was founded by Rob Lewis, who was previously chairman of Rara, a streaming service that closed at the end of March 2016.

This service was originally slated for launch last year but it seems now is the time for a proper push into market.

Electric Jukebox's streaming service launches on the 9th November, with the device being available in red, blue, and charcoal. It is priced at £169.

MORE: Report finds 22% of CDs bought on Amazon to be fake