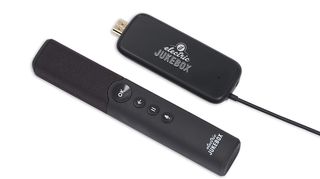 Do you find streaming services too complicated? Does a monthly subscription put you off online music libraries? Then you are the target audience. The Electric Jukebox (as opposed to the gas-powered one) wants to combine the music catalogue of streaming services with the plug-and-play simplicity of a CD player.

The Jukebox is a stick that plugs into your TV’s HDMI and 3.5 and streams music to it over wi-fi. It takes power from the mains or via micro USB. Once connected, you have access to a library of music tracks. You could do a similar thing using a Google Chromecast and a Spotify account, but the Electric Jukebox doesn’t need monthly payments or account registrations.

You pay a one-off price of £180 for the device, which includes a £60 one-year music pass for "tens of millions" of tracks and ad-free listening. After that, the service is free if you are prepared to listen to ads in-between the music, or you can continue to pay an annual fee of £60 for the premium ad-free service (like Spotify).

You’ll get "millions" of albums, curated music channels and celebrity playlists. While the service talked of "CD quality" music, we've since confirmed music files are 320kbps, the same as Spotify Premium. You may need to plug speakers into your TV first, though, as we'd take issue with the company's claim that "TVs these days have fantastic sound". Thankfully, the device also has 3.5mm and Bluetooth outputs.

The idea is to turn your TV into an old-school jukebox, only instead of walking up to it and pressing buttons, you do that with a remote control that offers both gesture and voice controls.

“While some may be comfortable with Spotify and Apple Music and spending hours configuring these services on specialist streaming devices, the vast majority of consumers really want something that works instantly, without a monthly subscription or credit card.”

Is there a catch? Well, it's not quite subscription-free. Your first year is included in the initial £180, but each year after will need a £60 music pass unless you want to start watching ads. It appears to be a two-tier system, just like the premium and free versions of Spotify. Pre-orders start today on the Electric Jukebox website – get in before 21st October and you get the early bird rate of £150. The Electric Jukebox will be out before Christmas.