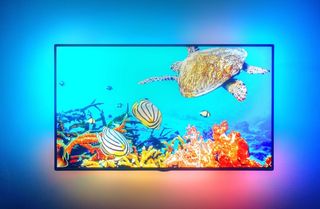 The technology works in a similar way to that on Philips Ambilight TVs. It takes whatever picture is on the TV and matches the pixel colour to the LED lights attached to the back of the screen. The lights then project onto the wall behind, making the TV screen seem larger than it actually is.

Apart from providing a more immersive picture, the technology is designed to reduce eye fatigue, something Philips Ambilight also claims to do. It works with any HDMI video source too; the HDMI splitter provided connects to both the TV and the LED light sticks behind it.

Responsive TV Backlighting, the company behind the project, says it will work with AV receivers, but is only HDCP 1.4a compliant. We've contacted the company to ask about 4K Ultra HD support and will update this story as and when we receive a reply.

DreamScreen can be used for music too, by projecting a light visualiser that responds to music being played through the TV, and can even be used to create ambient lighting in the room.