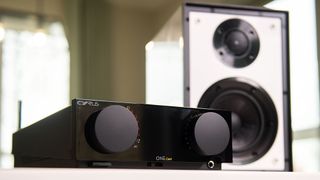 Ever since Cyrus broke its own design mould with the introduction of the contemporary-looking One amplifier in 2016, it's been procuring a One range. The One HD soon followed, adding digital connectivity and next-gen circuitry to the equation, and then came the One Linear speakers. Now, the fourth member has arrived, the Cyrus One Cast just-add-speakers, streaming system.

As name suggest, the One Cast (£1299) network streaming experience is based on Google Cast, meaning that any music streaming apps – Spotify, Deezer, Amazon Music, Qobuz, Tidal and BBC Sounds, to name a handful – can be played through the One Cast in just a couple of screen presses on your smartphone, tablet or other control device. Just open the streaming service app, click the Cast logo in the ‘now playing’ screen (one press) and select the Cyrus (second press) – no dedicated Cyrus app required. Simples.

Apple AirPlay 2 is the network streaming alternative, while Bluetooth and a range of physical inputs (Asynchronous USB, HDMI ARC, optical, coaxial, RCA with MM phono stage and configurable RCA) provide further means of connectivity to everything from TVs to turntables to AV set-ups. The USB input supports DSD128 and PCM 32-bit/192kHz files.

Pre-outs allow the One Cast to connect to a separate power amplifier, too, and those choosing to plug speakers straight into the Cyrus can benefit from what the British brand calls Speaker Impedance Detection, which automatically calibrates the One Cast's amplifier to the connected speakers.

Speaking of which, the One Cast houses the company's 4th-generation Hybrid Class D amplifier – the same found in the One HD – outputting 100 watts per channel, while the headphone amplifier, which feeds a front-panel 6.33m socket, is a Class AB design.

Further convincing everyone of its 'smart' commitment, the One Cast can be voice-controlled via Google Assistant, Amazon Alexa or Apple Siri when a smart speaker that uses one of those platforms is connected to the same network.

The best speaker deals ahead of Black Friday: smart, Bluetooth and more