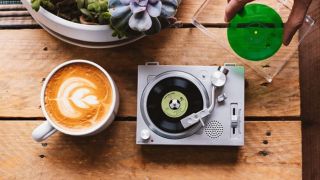 Crosley has announced during CES 2019 its intention to release a 3-inch record player to mark this year’s Record Store Day.

Having torn apart your existing record collection with its series of Cruiser suitcase turntables, the American company is apparently urging us to downsize with the miniature discs that’ll hold up to four minutes of music.

Partnering with Japan’s Toyokasei vinyl manufacturing plant to ensure a continued supply of three-inch vinyl, it seems Crosley is intent on this being more than on audio oddity.

For now, though, Crosley’s mini deck will be available only from select retailers on Record Store Day, costing $70, reports Digital Trends.

Equipped with an Audio Technica moving-magnet cartridge, built-in speaker, headphone jack and pitch-shift slider – because someone will obviously have released a crass mix with two of these things by midday on Saturday 13th April  – the turntable is powered by battery or USB.

Bookies currently have this Crosley turntable to win a What Hi-Fi? Award at 5000/1...

The inside story of Jack White's Third Man Records

A history of the weirdest vinyl records ever made