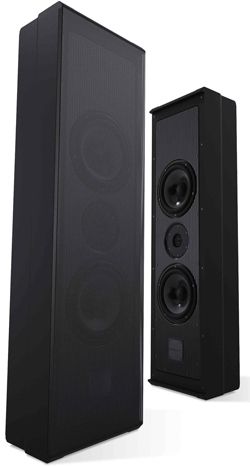 Bill McKiegan, Krell's President, claims the result "brings a level of performance [to the custom install market] that previously has not existed".

“Starting with the expertise resident at Leon Speakers, we have achieved the most rigid enclosure possible insuring the sound emanating from the speaker is only from the drivers," McKiegan continues.

He believes Krell's crossover design is also key to the resulting performance: “Typical crossovers act as funnels,” he says; “power delivered by the amplifier is choked off before it reaches the drivers. The breadth and dimension of the music is compressed by the crossover.”

“Our experience in designing and manufacturing high power amplifiers is the underpinning of our crossover design. The crossovers behave as if they were extensions of our amplifiers, directing the power to the drivers unimpeded.”

The Krell Modulari Ion speaker is priced individually - at a mighty $6500 each. We'd love to see and hear the scale of the high-end installs it may suit...