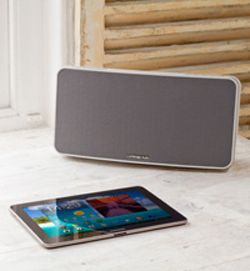 We got a sneak preview last night of the forthcoming Cambridge Audio Minx Air wireless speakers. There are two models in the range, the Minx Air 100 (above left) and Minx Air 200 (right). No prices have yet been confirmed for the UK or other territories.

The Minx Air 100 delivers, as its name suggests, 100 watts and has a pair of BMR drivers. No prizes for guessing that the Minx Air 200 (below) has a claimed output of 200 watts, but as well as two BMR drivers it gets a 6in subwoofer to beef up the bass.

Both models support AirPlay and Bluetooth (SBC, AAC, aptX) and have internet radio on board giving access to more than 20,000 stations. They use the same database as the Stream Magic 6, and control is via an iOS or Android app. The units themselves each have five presets for your favourite stations.

More details to follow as soon as we get them (a little bird tells us that might be at CES 2013 in January).