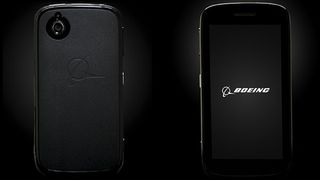 The idea of a smartphone that 'self-destructs' might seem like something straight out of Mission Impossible, but that's more or less one of the features of a new handset developed by Boeing.

Security and the ability to handle top secret communications is a significant factor in the design of the Boeing Black, which is designed with government and intelligence agencies in mind.

From the outset, the specs make it seem as if its a normal smartphone. It will run on the Android operating system, boast a 4.3in display and a dual 1.2GHz processor; and offer Bluetooth 2.1.

The Boeing Black will also have dual-SIM capability that'll let you switch between "government and commercial networks", which is just the beginning of the less conventional features.

Boeing says the smartphone's disk encryption will let users store sensitive data, while stored and transmitted data is protected thanks to the hardware crypto engine that comes with the device.

And if you're still wondering what makes it 'self-destruct', Boeing has implemented a feature that will see the device delete data and become unusable if any attempt is made to service it.

In documents sent to the Federal Communications Commission, Boeing said: "There are no serviceable parts... and any attempted servicing or replacing of parts would destroy the product."

But that's as much as we're likely to find out about the Boeing Black, with the firm requesting in its FCC submission that further details be "permanently withheld from public inspection".