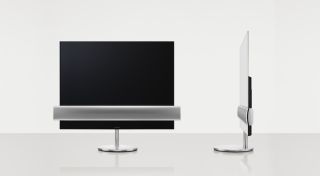 While all current OLED TVs use panels made by LG, the BeoVision Eclipse also uses LG’s 4K processing and smart webOS platform too.

“That is why we have chosen the name 'Eclipse' – two outstanding objects meet and create something even more spectacular and beautiful," he added.

Like LG’s own range of OLED TVs, it also supports the Dolby Vision HDR format, which is being promoted by Netflix and Amazon Prime Video as well as major film studios for Ultra HD Blu-ray releases.

B&O has made sound quality its priority too, and the BeoVision features a three-channel SoundCentre - a soundbar-like speaker across the bottom of the screen. The SoundCentre features a 2.5cm tweeter, two 6cm full-range drivers and three 10cm midrange/woofers which deliver 450W power.

With a built-in surround-sound decoder, the Eclipse’s centre channel performance can match any of the company's BeoLab speakers if they are used as surround channels. It features multi-room functionality, and can pair with up to eight compatible B&O speakers at once.

The Eclipse uses LG’s latest webOS 3.5 platform, meaning the likes of Netflix, Amazon and BBC iPlayer are accessible. On the music streaming side, it has Spotify, Deezer, TuneIn radio and Google Chromecast Audio, as well as AirPlay, DLNA and Bluetooth.

The supplied BeoRemote One BT has a neat trick up its sleeve. Hold down its ‘MyButton’ key for three seconds and you can add a source - a Blu-ray player or streaming service – as a shortcut.

The BeoVision Eclipse comes in either anodised aluminium finish or a coloured fabric speaker cover, and will be available from September. There are two sizes: 55in and 65in, priced at £8300 and £11,600 respectively.

We've waited over a year for B&O to make good on their OLED promise, so we hope it's worth the wait.