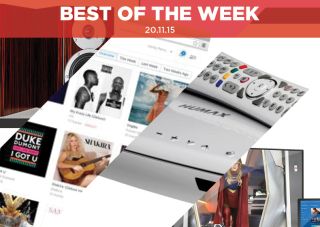 This week we were given the low-down on Sky's next generation Sky Q TV service, we visited Bang & Olufsen's headquarters in Denmark to discover more about its production methods in celebration of its 90th birthday and we also learnt that French music streaming service Rdio will be shut down, with many of its assets being sold to Pandora.

Reviews-wise there was the usual batch of impressive kit. Monitor Audio's Gold 50 speakers wowed us with their tonal balance and refinement, while Humax's HDR-1100S Freesat box proved it's still the market leader, even though the only real change is the addition of wi-fi. And Yamaha's YSP-1600 should be a genuine consideration for those who want 5.1 surround sound but only have space for a soundbar.

We were already aware Sky was planning a big launch, but we weren't expecting anything quite as big as Sky Q.

Sky claims the new service will "reimagine TV", combining live TV with catch-up and on demand content, along with streaming video apps, wireless music and more. There's new equipment too, with the main box cramming in 12 tuners (!), capable of recording four programmes, while letting you watch up to five live programmes across TV, separate Sky Q Mini boxes and tablets.

It's safe to say our first impressions are very positive.

READ MORE: Sky Q: What is it? When can you get it?

Bang & Olufsen at 90: behind the scenes

We were fortunate enough to be invited to B&O's HQ in Struer, Denmark, to see how the company makes and tests its products. Included in our tour was the complete history of the company, including the time it made electric shavers.

But the piece de resistance of the trip was seeing the main testing room, 'The Cube'. It's a 12 x 12 x 12m room that has products dangled in the middle on a crane. It sounds ridiculous, but in use it's entirely understandable.

We also managed to squeeze in a chat with Geoff Martin, B&O's Tonmeister, the man responsible for how the products sound.

READ MORE: Bang & Olufsen at 90: behind the scenes

Some sad news this week, French music streaming service Rdio has filed for bankruptcy and will shut down in the coming weeks. US streaming radio giant Pandora has decided to buy "key assets" and "technology and intellectual property", and will also offer jobs to some Rdio staff.

READ MORE: Rdio to shut down as Pandora buys "key assets" for $75 million

Qobuz goes into receivership - but points to "substantial interest" from investors

Star Wars: The Force Awakens to be shown in Dolby Cinema locations

4K TV, Ultra HD TV: everything you need to know

OLED TV: everything you need to know

Picture and sound quality is still the best we've seen from a Freesat box, and cements Humax as the market leader in this category.

But how do they sound? Clean, detailed and open is how. They might not be as exciting as some rivals, but we're thoroughly impressed by their organisation. The tweeter does a great job of defining higher frequencies and in typical Monitor Audio fashion, they're well-built and look gorgeous too.

Yamaha is no stranger to producing a soundbar that delivers as close to a 5.1 surround effect as you'll get and the YSP-1600 is the latest testament to that. This particular soundbar doesn't come with a separate subwoofer, but that doesn't mean it can't deliver a deep thud - though a subwoofer can be added should you wish.

It doesn't just cater for movies either as it'll happily accept music streamed via Bluetooth or from a NAS drive via ethernet. It also supports Yamaha's new MusicCast multi-room platform and will work harmoniously with any other MusicCast-enabled product.