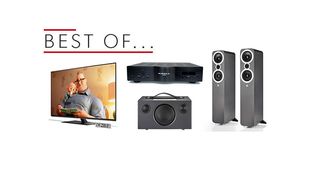 This week, we learned Netflix could be introducing a new price tier to its streaming service, Krell has produced its most affordable integrated amplifier yet and Klipsch is bringing more speakers over from the US, including floorstanders and a centre speaker.

We have a number of reviews for you to browse, inlcuding Audio Pro's Addon C3 wireless speaker, Panasonic's TX-55FZ802 OLED TV and Q Acoustics' 3050i floorstanding speakers.

It's also new What Hi-Fi? week, with the August issue now on sale. Inside you'll find coverage on loudspeakers from entry-level to £2000 whoppers. There's plenty of news on the latest goings on in the world of hi-fi and home cinema and reviews as well as our usual bevy of reviews.

Netflix is said to be testing its price structure with the possible introduction of a new Ultra tier.

The Ultra tier could be the only way to access UHD and HDR content on the service. It's also been mooted that Premium users could see simultaneous screen usage drop to two, while Ultra sits atop with four.

This is still in its testing phase and it's not been rolled out to UK or US customers yet. One to watch with interest.

Klipch's Reference speakers are making the way over to the UK after their stateside launch earlier this year.

Krell unveils its most affordable integrated amp yet

The K-300i is Krell's most affordable integrated amplifier. But don't mistake it for being cheap.

With a 150 watts per channel at ohms doubling to 300 watts into 4 ohms, the K-300i weighs 18.2kg and has two balance XLR inputs, three pairs of stereo RCA inputs and two pairs of speaker and stereo RCA pre-amp outputs.

Save over 45% on Sennheiser Momentum 2.0 headphones

How to get the best picture and audio on your tablet

HDMI ARC and HDMI eARC: everything you need to know

Sonos Beam vs Playbar vs Playbase: which is best?

Grandmaster Flash: the man who gave us the turntable as an instrument

We haven't been too taken with Panasonic's recent TVs. This OLED serves as a reminder of how good the Japanese company can be.

The operating system is basic and it's not as strong in sharpness and definition stakes as its main rivals. Nevertheless, this is a LG OLED-esque performance for less money.

We very much enjoyed Q Acoustics' 3050 speaker and the 3050i proves to be even better.

They offer a punchy, musical and subtle sound, with a large scale presentation and lots of energy.

They look slick and aren't fussy when it comes to positioning. Q Acoustics has done it yet again.

The more things change, the more they stay the same.

Audio Pro's C3 is the multi-room version of its T3 speaker that delivers the kind of performance we expect from the brand. It's a sound that's open and detailed, with tight textured bass and impressive timing.

The control app has its issues, but its portability, multi-room features and sound make for an excellent wireless speaker.