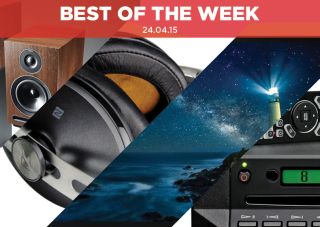 This week Sony announced plans to incorporate HDR into its 4K TVs, Acoustic Energy emerged from the doldrums with new owners and products, Norway committed to a date for its digital switchover and figures from last week's Record Store Day showed a big surge for vinyl sales.

On the reviews front we had three five-star efforts: the Sennheiser Momentum 2.0 Wireless headphones, Cyrus's CD Xt Signature transport and the BenQ W1080ST+ projector. Not to mention a smattering of four-star reviews and others.

Sony has announced support for HDR (High Dynamic Range), with an update expected to arrive for select Sony TVs this summer.

HDR is a recent development in TV imaging and is said to improve the colour and contrast of an image from any video source. Sony will be utilising its own proprietary version of the technology, which will feature on its X93C and X94C 4K Ultra HD TVs.

You can pre-order the X93C and X94C now with both TVs set for release next month.

UK speaker manufacturer Acoustic Energy has been out of the news of late, but recent investment, new owners and new products look set to revitalise the brand.

The first wave of new products will feature the AE 101 bookshelf speaker (£250), which will then be followed by a number of new products in various categories including portable audio, computer and multi-room audio.

We've already tested the AE 101 speaker and you can read how well it does in the July issue of What Hi-Fi?, on sale 3rd June.

FM radio switch-off to begin with Norway in 2017

Norway will be saying goodbye to its FM radio system in 2017 after the Norwegian government announced it has met the criteria required for the digital switchover.

With over half the population now listening to radio via DAB stations, the move is expected to save just under £17 million in costs.

There's still no word on when the radio switchover will take place in the UK, but a successful transition in Norway could see a firmer date set over here.

READ MORE: FM radio switch-off to begin with Norway in 2017

Riding on the crest of resurgent interest in vinyl, last week's Record Store Day saw a 39% increase in sales over the same day in 2014.

Bumper sales were not restricted to just vinyl with CDs and cassette tapes seeing an increase too. The biggest-selling album was The White Stripes's Get Behind Me Satan followed, surprisingly, by a cassette tape of Metallica's No Life Til Leather.

Carboncans claim to be headphones for vinyl lovers

Sennheiser's Momentum range of headphones keeps getting better and better.

You know a headphone is impressive when it performs as well with a wireless connection as it does with a wired one. Wireless playback is full-bodied and composed, something we aren't use to hearing from many wireless cans.

The price may deter some but there's quality in spades here – it's a superb headphone.

The CD Xt Signature is another in a long line of CD transports from Cyrus, and it's proof yet again of their excellence in the hi-fi market.

A step-up from its predecessor, it boasts stunning clarity and dynamics. The soundstage is a pleasingly expansive one and the performance on offer is one you'll be hard-pressed to better, even at double the price.

If you don't mind pairing it with a separate DAC then the Xt Signature offers exceptional sound quality.

BenQ won at the What Hi-Fi? Awards last year and they've kept that impressive performance going with the W1080ST+.

Colours are rich, there's plenty of detail available, and the picture performance is excellent in both 2D and 3D.