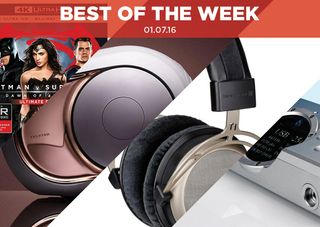 It was a good week for reviews as Beyerdynamic's Gen 2 T1 headphones, Chord's DAVE DAC and Revo's SuperSignal radio all received good notices.

MORE: Write your own review and you could win a prize

MORE: PlayStation 4 Neo vs Xbox One Scorpio: how do they compare?

Since the format's launch in March of this year, 228,000 UHD discs have been sold - comparing favourably to Blu-ray which had only reached 57,000 in a similar timeframe back in 2006.

It's a promising start and with more 4K UHD players and discs on the way it's likely to get better.

READ MORE: 4K Blu-ray gets off to a better start than Blu-ray

McIntosh Labs has a new Blu-ray player, preamp and phono stage on the way

The MVP901 is described as 'bridge player' that can upscale Blu-rays to Ultra HD (though it won't be able to play 4K discs).

The C2600 preamp builds on the C2300 and C2500 and has an "advanced digital audio section". The MP100 is the company's first dedicated phono preamp and comes with selectable moving coil and moving magnet inputs.

READ MORE: McIntosh Labs has a new Blu-ray player, preamp and phono stage on the way

The Gold Phantom is a significant upgrade on the Phantom Silver, with Devialet cramming in 4500W of power and an SPL of 108dB. In layman's terms, that means it can go very loud.

It also has Bluetooth connectivity and a speaker cabinet with a 22-carat pink gold-plated finish.

People can hear the difference with hi-res audio, study finds

Bose Speaker Cube is a Bluetooth speaker you build yourself

Six years after the original T1 headphones, Beyerdynamic has resurrected them for round number two.

Little has changed, but the T1s remain an impressive performer, combining plenty of insight, fluid dynamics and rhythmic precision.

The SuperSignal is a classy-looking radio for the price, but at the end of the day it comes down to performance, not looks. But in that respect too, it's a force to be reckoned with.

It has a generous, full-bodied sound that belies its appearance, and is a radio that's well worth an audition.

Chord is developing a reputation for giving its DACs odd names, but it may have trumped itself by calling its latest DAVE.

Despite this eccentricity, we haven't heard a DAC that sounds so natural or insightful as this. If you're looking for the best DAC money can buy, start here.