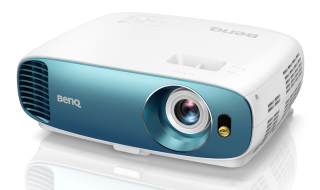 Despite the startling reduction of 4K HDR TV prices in recent years, the slope has been a lot gentler for projectors.

Still, Optoma’s £3000 UHD65 impressed our eyes enough last summer to win a 2017 What Hi-Fi? Award, and a recent flurry of sub-£2000 4K HDR projector announcements (such as Optoma’s forthcoming £1500 UHD40 and two ViewSonic models for “under €1300”) suggests the video technologies have now firmly infiltrated the midrange market.

Arriving just in the time for the FIFA World Cup and marketed as being for "immersive live sports", the TK800 has dedicated ‘Football’ and ‘Sport’ modes which aim to (for example) intensify green grass and keep skin tones natural, while boosting the clarity of the commentary and crowd.

The TK800’s has a new 5-watt CinemaMaster Audio+ 2 sound system, as well as auto keystone correction and 1.2x zoom for flexible set-up.