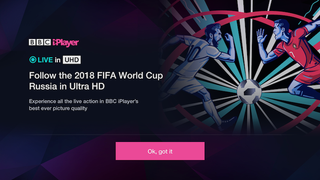 Last week, the BBC revealed the 2018 World Cup was the most live-streamed World Cup ever, taking a massive leap from 15.9m requests at Brazil 2014 to 56.3m this year.

Naturally we’ve been itching to know how many 4K Ultra HD streams iPlayer (the BBC's host platform) received, and today that itch has been scratched. And, better news yet, the BBC seemed to have lived up to its promise of providing ‘tens of thousands’ of UHD streams.

The Sweden v England quarter-final tie was the BBC’s highest online-viewed live programme ever, with 3.8m requests (3.9m including on-demand) on BBC iPlayer and BBC Sport, so it’s not surprising the date of that fixture (Saturday 7th July) hosted the highest peak number of UHD streams (60,300) - although the figure includes that day’s UHD Wimbledon streams too.

41,600 UHD streams ran for the Brazil v Belgium quarter-final and day five of Wimbledon, while the Belgium v Japan last 16 tie and first day of Wimbledon came in at 37,300.

This should give the BBC confidence to deliver future 4K trials for big events, iron out some issues and hopefully one day reach a bigger audience. But how does it plan to do that? We've spoken to the BBC to find out…