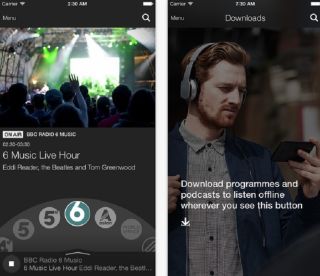 The updated iPlayer Radio app is now available to download from the Apple App Store for iOS devices and the Google Play Store for Android.

It's the first time users will have been able to download BBC radio shows for offline listening, with the feature being added to the app in time for the start of the BBC Proms 2015 this Friday.

Having been teased back in May last year, iPlayer downloads have arrived in an update to the iPlayer Radio apps for Android, iOS and Kindle that went live Wednesday.

The update allows you to download multiple shows at the same time over wi-fi, though not over 3G/4G at launch, with shows being stored on your tablet or smartphone for up to 30 days.

The "world's largest classical music festival", the BBC Proms, starts this Friday 17th July, with almost all the Radio 3 broadcasts from the eight-week festival set to be available for download via iPlayer Radio.

Other shows now available to download include the Live Lounge, Annie Mac show and the Essential Mix on Radio 1, Radio 2 shows from Jamie Cullum, David Rodigan and Jo Whiley, World on 3 from Radio 3, almost all of Radio 4's programmes, and Mayo and Kermode's Film Review on 5 Live.

"We know this is something they’ve been asking for and we have been working hard to make it possible. Now they will have more choice than ever to listen to their favourite programmes, with all downloads available for 30 days and no need to worry about mobile data limits.”

MORE: Catching up on iPlayer could soon require a TV licence