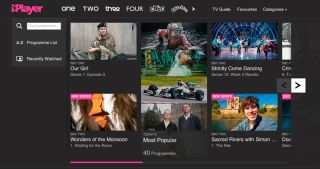 The corporation has confirmed that TV and radio programmes are now available through either iPlayer or iPlayer Radio for 30 days – a major increase on the seven-day window in place since the service launched in 2007.

The BBC revealed its plans to extend the window earlier this year, and according to BBC director of future media Ralph Rivera, the move comes in response to a "huge demand" for content to be available for a longer period of time. The BBC now gets seven million programme requests each day.

The BBC cited the example of Happy Valley – a BBC One programme that received 145,000 searches in the three weeks after it became no longer available to view on iPlayer. That is now set to change.

Speech and music programmes from the BBC's UK-wide radio stations – and the Scottish, Welsh and Northern Irish national stations – are now available to stream for 30 days. World Service and regional stations will follow shortly.

BBC director-general Tony Hall said: "BBC iPlayer pioneered online viewing. It is recognised as not just the first, but the best service of its type in the world. It offers amazing value. But we want to go further.

"That’s why we began reinventing iPlayer earlier this year with a brand new redesign and features. Extending the catch up window to 30 days now makes the best value on-demand service even better."