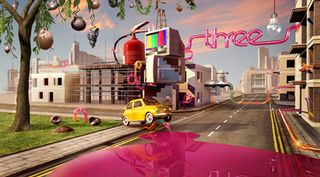 UPDATE: BBC Three – the youth-orientated TV channel that first aired comedy hits Gavin and Stacey and Little Britain among others – is to be closed by the corporation as part of ongoing cost-cutting measures.

The BBC says the channel will be "reinvented as a new and innovative online service" once it stops broadcasting on digital and satellite platforms in late 2015. But the plans still require BBC Trust approval.

It is thought the move will save more than £50 million a year – with £30 million going towards the BBC One drama budget. It'll also let the BBC extend CBBC by an hour and open a BBC One +1 service with the freed-up spectrum.

In an email to staff, BBC director-general Tony Hall said: "BBC Three will continue to do all the things we love but it will also have the freedom to break traditional shackles and allow the BBC to be a leader in digital change.

"It will not just be a TV channel distributed online. There is a wonderful creative opportunity here to develop new formats with new programme lengths – and to reach young audiences in an ever growing number of ways."

Hall also said the move gave the BBC an opportunity to learn more about the lengths of new dramas and comedies, with the potential to learn from "new market players like Netflix and Amazon".

OPINION: How Amazon and Netflix are changing the TV landscape

BBC Three – the youth-orientated channel that first aired comedy hits Gavin and Stacey and Little Britain among others – is facing the axe as part of the BBC's ongoing cost-cutting drive.

Reports suggest that an official statement will confirm the plans this week, which will mean shows currently broadcast on the channel will become made available through iPlayer only.

The news that BBC Three could be taken "off-air" comes after BBC director general Tony Hall told the Oxford Media Convention that the BBC was seeking to save an extra £100 million.

In 2013/14, the channel had a budget of £85 million and it's believed that taking it online would be a significant step towards the BBC's savings target, although some costs would remain.

BBC Three started broadcasting in 2003 and is currently available on Freeview, Freesat and paid-TV providers. However, plans to move the channel online will require BBC Trust approval.

A number of performers who found success on BBC Three have already given their support to the channel, with Little Britain star Matt Lucas calling it "the home of new comedy and drama".