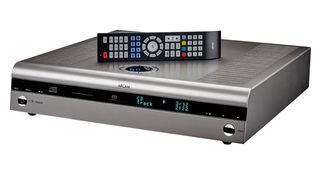 Here's a bit of pre-Christmas cheer: Arcam is cutting the prices on its Award-winning Solo Music system and A29 and A39 Class G stereo amplifiers.

In addition, Arcam has just released the latest version of its MusicLife app - v1.3.1 - which brings internet radio and Tidal and Qobuz music streaming services to the Solo systems.

There's more. Arcam has discontinued the five-star FMJ A19 stereo amp due to "component supply problems", and has reduced the cost of its newer Class G amps to make them more competitive.

Despite an increase in component costs, the price of the Arcam CDS27 CD/SACD player/streamer remains at £699 and the Arcam UDP411 universal Blu-ray player is held at £799.

In a separate development, Arcam has released a firmware update that brings DTS:X and DTS Neural surround sound capability to its AVR 390/550/850 AV receivers.