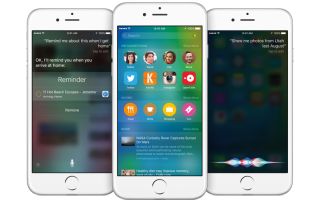 Apple announced the latest version of iOS with a focus on Apple Pay, a new Apple News app, a number of Siri updates and some key iPad specific updates, including picture-in-picture and multitasking.

Apple claims Siri will now be 40% faster and 40% more accurate, as it revealed around a billion requests are made on Siri every week. "Proactive assistance" will learn from your usage and suggest relevant information, a little like Google Now on Android.

Voice search now has deeper linking with apps, allowing you to search the likes of the iTunes Store and YouTube using Siri in iOS 9.

Apple Maps adds support for "transit systems", promising to precisely map train stations and underground routes, including London, while there was also an update to Notes so it syncs with iCloud.

There's a new News app for publishers, with sites such as ESPN and the New York Times delivering articles, with "over one million topics" to allow you to customise your Apple News reading experience.

The iPad gets special treatment in iOS 9, with the keyboard working as a trackpad, split screen apps, picture-in-picture and multitasking apps (only on iPad Air 2). A new Slide Over feature lets you work in two apps at once.

iOS 9 also promised to boost the iPhone battery, with around an hour of extra life promised, plus a Power Saver mode for up to three hours more battery life.

For the first time Apple will have a public beta for iOS 9 from July, with a full (and free) update rolling out in the Autumn. All iOS 8 devices will be compatible with iOS 9.

Apple Pay in the UK

It was also confirmed that Apple Pay will be coming to the UK. 70% of UK debit and credit cards are set to be supported by Apple Pay, with HSBC, Lloyds Bank, Nationwide and Santander just some of the banks on board.

If you're looking forward to buying a Nando's with Apple Pay on your Apple Watch, you'll be pleased to hear Apple also launched watchOS, bringing native apps for the Apple Watch.

As well as new apps, the Apple Watch will get new Timepiece watch faces, a Time Travel feature for scrolling through your schedule, improved email and FaceTime functionality, plus upgrades to Apple Pay and Siri for the Watch.

Also announced was OS X El Capitan, the latest OS for Apple Mac. This is coming as a free upgrade for all users this Autumn and includes split-screen, improved windows management, muting tabs in Safari, upgraded Spotlight search and Metal for Mac for gaming.