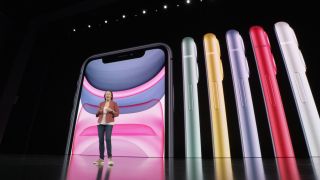 The iPhone 11, 11 Pro and 11 Pro Max have just been unveiled at the Steve Jobs Theater on Apple's campus in Cupertino, California.

None are 5G-ready, nor are they foldable, unlike some rivals, but they do build on the hugely competitive and class-leading XS, XS Max and XR handsets of 2018 with a raft of improvements, including a big boost to camera performance, new 'spatial audio' tech and 4K HDR video up to 60fps.

We kick off with the most colourful new addition, the iPhone 11. Much of the attention here was paid towards the 11's dual camera, which comprises an all-new wide lens as well as a new ultra-wide camera that captures a 120-degree field of view. An updated camera interface allows you to see outside of the frame; simply tap to see ultra-wide and what else is in your extended frame.

The iPhone 11 features an anodised aluminium and glass design, described as the "toughest ever in a smartphone", and is available in six new finishes, including purple, white, yellow, green, red and black.

Both rear cameras and the 12MP TrueDepth front snapper support 4K video capture (up to 60fps in rear, 30fps in front), with slow-mo also available on all three lenses. Apple is promising the "highest quality video ever in a smartphone".

As expected, there's a new A13 Bionic chip powering all the handsets. Like the iPhone XR (which continues) the iPhone 11 uses a 6.1in liquid retina display but adds  'spatial audio' tech courtesy of Apple's new sound virtualiser. Dolby Atmos support is also included.

The 11 Pro, meanwhile, is "the most powerful iPhone ever" and features a brand-new Super Retina XDR OLED display (2436 x 1125) in 5.8in or 6.5in (also known as the 11 Pro Max). Apple says they boast the highest pixel density implemented in a phone (458ppi), with an improved 1200 nits of brightness, P3 wide-colour reproduction and support of Dolby Vision and HDR10.

Screen operation is now 15 per cent more efficient too. And while we're on the subject of efficiency, the 11 Pro promises four-hours of extra battery life compared to the iPhone XS. Essentially it's all about achieving greater speed and power in the most efficient way.

The iPhone 11 Pro (and Pro Max) also has an all-new design made from surgical-grade stainless steel, with the back panel a single sheet of glass. Both phones boast a new matte, textured finish and are available in space grey, silver and gold, plus an all-new midnight green colour.

But the big news relates to the camera system.

The biggest rumour circling the iPhone this summer was an all-new triple-lens camera rear system mounted on square bump, and this feature has appeared on the iPhone 11 Pro Max. Combining wide, telephoto and ultra-wide cameras, the triple array is powered by a new image signal processor.

Deep Fusion looks like it could be a game-changer – the 11 Pro Max shoots nine images per capture, after which a neural engine optimises every captured pixel for enhanced detail and low noise before presenting you with a finished image. All three rear-facing cameras can snap 4K 'extended' HDR up to 60fps.

The film director in you will be delighted to hear there's an 'advanced' video editing suite built into the photo app, too.

Apple TV Plus launches on 1st November at £4.99/month