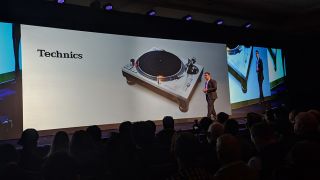 The Panasonic/Technics CES press conference has finished and the dust is settling on a smattering of new products. The rumoured Technics turntable(s) have arrived, there was a hint of a new flagship OLED TV, plus new Blu-ray players and assorted other developments, including an electric Harley Davidson motorbike (yes, Panasonic is involved). Here's our quick-fire round-up of what to watch out for in 2019 from Panasonic and Technics.

The biggest news, and the most exciting from our point of view, is the return of the Technics SL-1200 turntable as a more affordable, DJ-aimed deck. Previously launched SL-1200 turntables since the brand relaunched have been high-end hi-fi offerings, but the new SL-1200 MK7 looks set to be relatively affordable, with DJs as well as vinyl lovers in mind. And it looks great.

There's a hi-fi deck, too

And that wasn't all for Technics turntables, the SL-1500C deck is also new for 2019. The SL-1500 was originally an upgraded SL-1200, going back to the 1970s and 80s, and now Technics has revisited the model name and relaunched it with the SL-1500C. We expect this to be a slightly more expensive version of the new 1200, but without the DJ features and pitch control - so a purer hi-fi turntable. We look forward to hearing it.

There is a new flagship OLED

There is a new flagship Panasonic 4K OLED TV, the GZ2000... and that's about all we know for now. Panasonic mentioned the new TV in its press conference but proffered little else by way of information. We look forward to finding out more over the next few days.

8K TV is a clear theme at this year's CES, even if wide-scale adoption - and content - may seem a long way off. With LG, Samsung and most other TV players set to make plenty of 8K noise, it was notable by its absence during the Panasonic press conference. More to the point, there was no mention of any other TVs aside from the flagship OLED. That may change over the coming days or we might have to wait until Panasonic's annual convention next month for all the details. Whether there will be a large TV range, and any 8K sets, remains to be seen.

Electric bikes and everything else

The relative lack of products compared to years past - as is the case for most of the big AV brands, who no longer launch an avalanche of new products at once in January - was perhaps in part due to the fact Panasonic has so much else going on as a company. Electric batteries is just one of the many revenue streams - a big one - that makes Panasonic tick, and the CES press conference saw Panasonic reveal the first-ever electric Harley Davidson, as well as an electric road bike. It added some drama to the press event but also made clear that Panasonic, just like its multinational rivals, is much more than an AV company, and there's much more to CES than new consumer products.