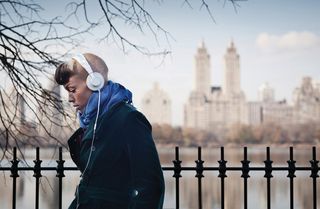 We've rounded up five pairs of headphones that could certainly be used in the dictionary to illustrate the word "bargain" - such is their prowess and performance for a relatively small price.

So, if you're heading on your travels and need an affordable travelling companion, or if you just want a replacement that won't cost the earth, read on...

Is there a better place to start than with some Award-winners? No, make that multi-Award-winners – for that is what you get with the best in-ear headphones under £50 from our Awards 2014. If you want to upgrade your smartphone or music player's freebie bundled buds, look no further.

Don't panic – we haven't lost our mathematical minds. These Sennheiser buds may have been put to the test when their price tag was £70, but these excellent all-rounders are now available for less than £50. Five stars has just become even more affordable.

If in-ears aren't really your thing, you'll be pleased to learn that on-ears aren't averse to being high quality and low price either. Take these Philips cans, for example – fun and stylish, and spotted at a mere £40 with Argos right now.

A pair of Bluetooth on-ears with full controls for your smartphone? For £30? Is there a catch? Not really to be honest. Granted, there are some sonic flaws to note, but at this price, you'll get a very listenable pair of cans and that's some achievement.