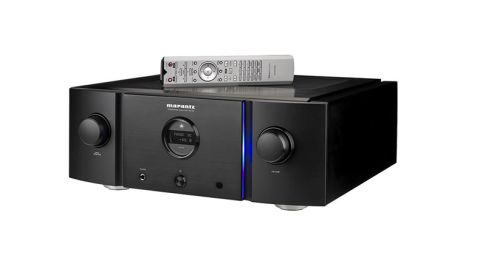 The Marantz PM-10 blends power, detail and composure superbly, and all from a neat, well featured package

For most die-hard hi-fi purists, the ultimate amplifier comes in at least three boxes – a preamp and pair of monobloc powers.

Such a design has dedicated power supplies for each section so interference between them is minimised. In short, three boxes (or more) are good for sound quality, if not your wallet or listening room space.

This time Marantz has done things differently. Recognising that even dedicated audiophiles don’t necessarily want the system dominating their room, its latest reference offering, the PM-10, is a one-box amplifier.

But don’t view this as a compromise – it’s obvious that was the last word on its engineer’s minds.

While the PM-10 may be an integrated amplifier, inside it’s as separate as possible. The power amplifier section is arranged in monobloc form with each channel independent of the other right down to having dedicated power supplies.

The preamp also has its own power feed and a great deal of work has been done to minimise unwanted interaction between the different sections. The only things shared by these distinct parts of the signal chain are the casework and a single mains cable.

The single chassis design brings other challenges, most notably heat dissipation, particularly as Marantz wanted the PM-10 to have plenty of power to drive a wide range of speakers.

It’s rated at a hefty 200W per channel into 8 ohms and, even more impressively, 400W as impedance halves.

Such a high output combined with sensible heat levels – the amp gets warm during use but no more – is down to power amps that use full-bridged analogue switching circuits fed by switching power supplies. Switching amplifier designs are often called Class D.

The PM-10 has a fully balanced analogue preamp stage. This kind of design helps to reduce noise levels but also adds cost by doubling the number of parts in the signal path.

That’s why it’s usually only seen at premium prices. Unlike the power amp sections, the pre circuitry is fed by a traditional linear power supply.

We’re surprised and pleased to find that Marantz has included both a switchable moving magnet/moving coil phono stage and a headphone output.

Those wanting an integrated amplifier generally want it to be a complete solution to their system needs rather than having to add external boxes in order to use their turntables and headphones.

While the PM-10 is a chunky box by conventional standards, it’s compact when judged against typical pre/powers sold at similar prices.

Build quality is superb; the aluminium casework is immaculately executed and beautifully finished with no visible fixings on the top and sides. It’s solid and nicely damped with liberal use of copper to help shielding and damping.

There are two finish options – the black of our review sample and a light gold variant. Internal quality is equally pleasing with high-quality components and carefully arranged circuit board.

This amplifier is nice to use, with a positive feel to the front panel controls and a classy system remote that puts the efforts of most high-end rivals to shame. Yes, it’s packed with buttons but they’re neatly and logically arranged.

A product such as this requires a quality partnering system. We use our usual Naim NDS/555 PS streamer and Clearaudio Innovation Wood turntable as sources along with our reference ATC SCM50 speakers.

Spendor’s Classic 200s and Dynaudio Special Fortys also get plumbed in to see how the Marantz copes with different speakers. As does the SA-10, the PM-10’s partnering SACD/CD disc player, with good results.

We start by optimising the PM-10’s sound. Delve into its set-up menu and you’ll find a setting called Purest. This switches off the recorder output, auto standby setting and the headphone circuit.

Of course, if you plug in a pair of headphones the circuit is activated (and sound is muted from the speaker terminals). Turning Purest on adds just a touch more clarity and focus to the amplifier’s presentation.

The difference isn’t massive, but with a transparent enough pair of speakers it’s easy to detect. The balanced XLR is the best of the lot, which is hardly surprising considering the use of balanced circuitry inside the product.

The sound through this input is notably more dynamic and cohesive than the other choices.

This is a deeply impressive amplifier in many ways.

As that hefty power output suggests, it’s happy playing at high levels and sounds unstressed when doing so. This Marantz is not particularly fussy about speakers, as many Class D designs are prone to be, and it’s character remains consistent regardless of partnering speakers used.

Yet, despite all that muscle, the Marantz sounds wonderfully civilised, with the kind of smoothness, fluidity and refinement that reminds us of some of the better high-end valve alternatives.

Its presentation isn’t wholly neutral though. It remains true to the traditional Marantz sound; one that parks itself on the slightly fuller, rounded side of neutral.

This trait isn’t taken to excess and it does make the PM-10 less fussy about poor quality recordings than would usually be the case, so we don’t mind so much.

That monobloc power amplifier configuration helps to make for some impressive stereo imaging.

The PM-10’s soundstage is spacious, delivering plenty in the way of image width, depth and even height with the orchestra securely planted in position. The instruments don’t waiver in position when the music becomes demanding either.

Moving to Kanye West’s Yeezus shows off the amplifier’s punch, and its ability to deliver pile-driver bass lines when required. Yet beneath all that bravado there’s a rich vein of finesse.

Kanye’s vocals come through with clarity and attitude while there’s enough in the way of resolution to cut through the dense production and allow the listener to follow low-level instrumental strands with ease.

There’s plenty of detail and an overwhelming sense of control that suggests the amplifier has the confidence to cope with anything you care to throw at it.

It’s not all good news though as Leonard Cohen’s Tower Of Song proves. This is a track that needs delicacy in both dynamics and timing to communicate its tongue-in-cheek nature and playful rhythmic flow.

The PM-10 struggles to do this, making the song sound more straight-laced and serious than it should. Where the track should make us smile, we don’t notice the humour. For all its talent, this Marantz is a little flat footed and muscle bound with material such as this.

At least it has a fine phono stage. The feed from our Clearaudio Innovation Wood sounds crisp and clean with all the power, refinement and punch of the line stages.

Noise levels are admirably low too, making this amplifier suitable for really low output cartridges. That’s a testimony to the care taken in implementing the phono circuit into what is such a densely packed amplifier.

We’re equally positive about the headphone output. Usually these things are a box-ticking exercise, but here Marantz’s engineers have taken care to ensure the headphone signal sounds as good as the sound coming out of the speaker terminals.

We try a number of headphones, ranging from Grado’s PS500es through to the Beyerdynamic T1, with consistently good results.

The PM-10 is a hugely capable amplifier and something of a technological marvel in the way Marantz has managed to blend so much in the way of features and performance into such a neat and well-designed package.

Is it the best sounding integrated amplifier we’ve heard at this level? No, not quite. But without a doubt, it’s a convenient way of getting quality, high power sound from a single box.