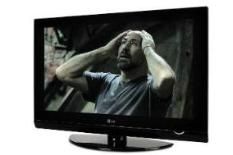 It's cheap and the TV tuner is decent, but we're put off by the lacklustre video performance

Unlike other new sets from LG, this TV doesn't offer an integrated hard disk drive, so there's no PVR functionality (look to the '6900 models for that).

What it does do, however, is use the 'Dual XD' engine as opposed to the '6900's XD engine. And you'll also find four, rather than three HDMI inputs.

Other connection highlights include a USB, a digital optical audio output, a PC input and 'Just Scan', pixel-for-pixel compatibility.

The off-air picture is decent, with smooth motion and an impressive level of insight and sharpness to edges. Only a hint of noise lets the side down at times.

Video images lack detail
We're less impressed with video playback. Send a 1080p Blu-ray signal and the LG's scaler seems to struggle with the higher resolution; the picture fails to deliver the detail and sense of three-dimensionality that we see on better screens.

The 32PG6000 struggles to do true, deep black levels, too, looking comparatively grey and flat, and even the overall colour balance is never quite how we'd like to see it.

Watching standard def DVDs produces better results but is still underwhelming compared with the best. Black levels are poor and the overall image lacks the all round quality available elsewhere.

Unless all you want is a solid TV tuner on a budget, we can't find reason to recommend this.