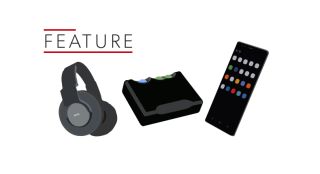 Though we’d all love to simply sit in our listening rooms all day, thumbing through our record collection with a glass of whatever’s to hand, it seems more likely most of our listening nowadays is done through portable devices.

But does this mean we must forgo exceptional sound - or that the acquisition of exceptional portable sound must send us to the dark web in order to sell one of our kidneys? Not at all.

Now, the chances are you already have your source in this set-up – but for the purposes of putting together a system, we’ve opted to include Samsung's Galaxy S8+.

The Galaxy S8+ is like an S7 Edge that went away for the summer holidays and hit puberty. It’s taller and slimmer, with good looks guaranteed to turn heads at the water fountain. Or wherever else you take it out of your pocket.

It has a bezel-busting display that fills the front of the phone, squeezing more screen space into your hand than any other Galaxy handset without making it feel like you’re lugging an unwieldy monster around.

Most significantly when it comes to sound, though, is the support the S8+ offers for high-res audio - including DSD128 files. The microSD card slot makes a return, too, so you can boost the 64GB of built-in storage by up to another 256GB, and thus have plenty of space to build a hi-res music library.

With a decent set of cans plugged in, music is detailed across the board, with bass that doesn’t overwhelm and plenty of vocal clarity. The Apple iPhone 8 Plus may have a slight edge in terms of native performance for its full-bodied and insightful sound, but if you’re thinking about boosting said performance with a DAC then it’s worth noting the iOS 10.3.1 update (at the time of testing) has had some teething problems when working in conjunction with USB DACs recently – another reason why we’ve gone with the Samsung here.

And that DAC could only ever really be a Chord Mojo.

The name is short for ‘Mobile Joy’. Quite.

Unlike most of its rivals, Chord refuses to use off-the-shelf DAC chips inside its converters. Instead, the company’s digital products feature powerful programmable processors loaded with proprietary software.

There’s no display as such, but the power button lights up in different colours depending on the sampling rate of the input signal (red for 44.1kHz, green for 96kHz, white for DSD). Similarly, the lighting colour behind the volume buttons changes according to level. It soon becomes second nature.

As for inputs, there are (micro) USB, optical and coaxial – the latter taking the form of a 3.5mm socket rather than the usual RCA or BNC – and a second USB connection for charging only. Outputs are limited to a pair of 3.5mm jacks.

So why have we chosen the AKG K550s to complete this trio?

Some headphones are more assertive than others, and the K550s don't equivocate: their priority is indoor use. But should you brave the great outdoors with them, you’ll find movement doesn’t alter their sound even slightly. Nor does the cable transmit any bumps it might receive.

They’re big headphones in every way: large earpieces featuring 50mm drivers, a broad headband and a long, chunky cable. But despite looking like a pair of road-digger's ear-defenders, the AKGs are relatively light and comfy.

Importantly, the K550s are a lesson in transparency. It’s sometimes a fine line between neutrality and lack of passion - but they walk it confidently, relishing the lush, analogue sound of Etta James' Something's Got a Hold on Me, yet having sufficient drive and attack for more hard-hitting listens.

Effectively, they’ll give you every detail and subtle insight emitted from the fabulous Chord Mojo.

But it’s not the excellent resolution that impresses us most. It’s the Mojo’s ability to organise all that information into a cohesive and music whole that makes it stand out from the competition.

It delivers the hard charging rhythm track of Stevie Wonder’s Higher Ground brilliantly, communicating the song’s unstoppable momentum with real enthusiasm. The presentation is solid and full-bodied, but avoids any hint of excess richness at mid- and low-frequency positions.

Mozart’s Piano Concerto No.12 in A Major confirms the Mojo’s convincing tonal balance and reveals a surefooted handling of dynamics. There’s power and scale when the music requires, but also finesse to make the most of the subtler passages.

There’s refinement too. The Mojo’s transparency means poor recordings (and sources) will be easy to spot, but this DAC won’t go out of its way to be nasty.

That sense of organisation is clear here, as is the Mojo’s composure when the piece becomes demanding. There’s never any sense of stress. Every note is given the space and attention it deserves.

The key to a great portable setup is versatility. This glorious triumvirate can be used inside or out and in, the case of the Mojo and K550s, even swapped in for components in your main hi-fi setup should you wish.

More revealing than the Emperor’s new clothes, these over-ears remain the go-to cans up to £400. Their open-back configuration makes them for home use only but it facilitates a balanced, transparent performance with great rhythmic drive and precise timing.

The fact these were £250 when we first tested them a couple of years ago is enough to put them in the frame here. You won’t find a better-built pair of headphones in this area of the market, nor will you find it easy to better the P5s’ punchy rhythms or insight.