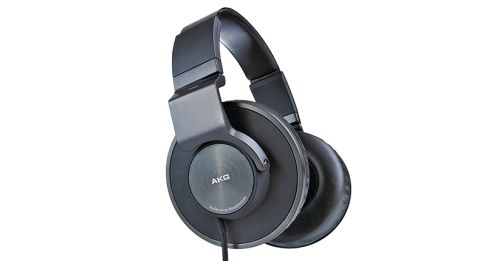 Some headphones are more assertive than others when it comes to stating their case, and the AKG K550s don't equivocate: their priority is indoor use.

The K550s are big in every way: large earpieces featuring 50mm drivers, a broad headband, and a long, chunky cable.

But despite looking like a pair of road-digger's ear-defenders, the AKGs are relatively light and comfy, even during long sessions – though they do warm your ears more than some.

Tactile and sturdily built, they certainly feel like £250-worth, even if it's debatable whether they look it. What's not debatable is AKG's achievement.

These are an over-ear, closed-back design, a configuration intended to isolate the wearer from noise while also preventing sound leaking from the cups (thus denying the outside world access to your good taste in music).

They perform both duties admirably, but what's profoundly impressive is just how unlike a closed-back pair of headphones they sound.

A FLAC file of Etta James's I'd Rather Go Blind, delivered via the Award-winning Furutech ADL GT40 headphone amp, is airy and spacious in a way that's beyond the majority of closed-back designs.

The soundstage (which sounds reasonably remote, rather than as if it's being thrust directly into your ears) is well-defined, and separates individual threads of the recording as well as it integrates them into a coherent whole.

The vocal (from which, in this instance, the entire recording hangs) has ample space, and is packed with information – the AKGs don't lose a scrap of detail.

The overall presentation is expertly balanced. The K550s are sweetly communicative, handle tempos in a natural, unforced manner and punch into and out of low-frequency information with precision.

It's sometimes a fine line between neutrality and dispassion, but the AKGs walk it confidently – and even though they relish the lushly analogue sound of Etta James, they have sufficient drive and attack to make Ladytron's Seventeen an exciting, hard-hitting and dynamic listen.

They're particularly adept at teasing out the fine details at the back or at the edge of the soundstage, and give a vivid, high-resolution insight into a mix.

Should you brave the great outdoors in a pair of K550s, you'll find that movement doesn't alter their sound even slightly, that the cable doesn't transmit any bumps it receives, and that for all their comfort the AKGs don't grip your head as securely as some.

Indoors, though, they're just a hugely capable pair of closed-back headphones that simply don't sound closed.