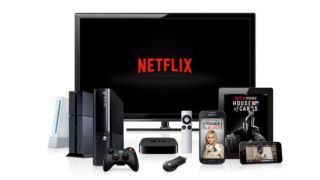 Welcome to What Hi-Fi?'s round-up of the best movies on Netflix in 2020.

Chances are, you're spending more time inside than ever before. With a quarter of the world's population now in lockdown, there's more demand than ever for something to watch. And streaming services like Netflix can help meet that demand.

But what should you watch?

We've rounded up 12 of the best movies on Netflix right now. From illuminating documentaries to escapist sci-fi films and zany comedies, there's guaranteed to be something here to distract you from the current pandemic.

So read on, and settle in for some quality viewing.

Note: not all movies are available in all regions. We've used the Netflix US catalogue, as it's the most extensive, but Netflix in the UK, Europe and the rest of the world may differ.

John Hughes' 1980s classic sees a very young Matthew Broderick play the eponymous Ferris Bueller, who fakes a sickie in order to loaf around with his friends. It shows Hughes firmly in fun mode, a world away from his more serious, angsty fare of The Breakfast Club (made just a year before Bueller). And has there ever been a better time to heed Ferris' mantra: "Life moves pretty fast. If you don't stop and look around once in a while, you could miss it"?

Chris Hemsworth plays Tyler Rake, a Black Ops mercenary who is on a mission to rescue the kidnapped son of an Indian drug lord. It's a thriller, not to mention a Netflix Original, so you won't be able to see all the action anywhere else. Because it's based on a graphic novel, expect a little more in the way of character development than the usual mindless gung-ho heroics (although there's plenty of this too!). Lockdown getting you down? Crack open the popcorn and enjoy.

This 2010 documentary of the legendary F1 driver Ayrton Senna was directed by Asif Kapadia, the man behind similar biopics of Amy Winehouse (2015's Amy) and 2019's Diego Maradona. It charts Senna's remarkable career, from his 1984 debut to the crash a decade later that tragically killed him. Full of archive footage from his professional and personal life, it's a must for fans.

Raiders of the Lost Ark

Indy's first outing is – in many eyes – still his best. Raiders has it all: Nazis, biblical artefacts, and the best sword vs gun fight scene, well, ever. It's proper Boys Own stuff, full of whip-smart dialogue and acts of derring-do, and the perfect antidote to the troubled times we're living through.

In two friends' native South Africa, the US singer Rodriguez was as big as Elvis. But they were amazed to discover that everywhere else in the world, his two albums sank without trace, and the singer himself hadn't been seen for years. Was he dead, as rumoured? Or just a recluse? Thus starts an epic journey to try and track down Sixto 'Sugarman' Rodriguez, and reinstate him to his rightful place in music history.

There Will Be Blood

And there is. Based on Upton Sinclair's Oil!, Paul Thomas Anderson's period drama stars Daniel Day-Lewis as a silver miner-turned-oilman ruthlessly trying to make his fortune during South California's turn-of-the-century oil boom. Day-Lewis was lauded for his role: an Oscar, a BAFTA, and a Golden Globe were among the awards he picked up for his efforts.

Released in 2007, this is the seventh version of Ridley Scott's sci-fi classic, and the only version over which he had complete control (bizarrely, he didn't completely oversee even 1992's The Director's Cut). It's the only version to contain the full-length version of the unicorn dream, along with the extra violence and additional edits from the international cut. To many, it's the definitive Blade Runner, and as such, possibly the definitive sci-fi film.

It might make you sick of Sonny and Cher's I Got You Babe, but this film will give you plenty of belly laughs, and at the same time lift your spirits. Bill Murray is in career-best form as misanthropic weatherman Phil Connors, who gets stuck on assignment in a small town. His lot gets even worse when he's forced to relive the same day over and over again. But could it actually be a blessing in disguise? If you've never seen it, cancel those Zoom drinks this evening and educate yourself, pronto.

Now we're all stuck indoors with our virtual assistants, isn't it time we reevaluated our relationships with them? That's the aim of this 2013 sci-fi satire, in which Theodore Twombly (a moustachioed Joaquin Phoenix) falls in love with his virtual assistant, voiced by Scarlett Johansson. The vision of the near future is spot on - all tasteful furnishings and subtly integrated technology - and could've come straight out of an Apple advert. Which makes its message all the more unnerving.

A Richard Curtis rom-com? Really? But hear us out - this isn't his usual 'toffs on heat' affair (as he memorably termed his own mega successful Four Weddings and a Funeral). Rather, it's a more melancholy story of boy meets girl, boy goes back in time in an effort to change his future, boy learns valuable lesson about making the most of every day. The humour is as comforting as ever (this is the man behind The Vicar of Dibley, remember), but it's a sobering tale with a somewhat darker outlook.

That score. Nicolas Winding Refn's 2011 adaptation of James Sallis' novel of the same name has a pulsing, neon-drenched Cliff Martinez soundtrack that's worth the Netflix subscription alone. Ryan Gosling puts in a monosyllabic performance as the unnamed getaway driver, while Carey Mulligan plays Irene, his love interest. Turn it up.

Surely we're not including this, one of the zaniest comedies of the late 20th century? Of course we are. And don't call us Shirley. The late, great Leslie Nielsen plays the hapless Lieutenant Frank Drebin, who's tasked with foiling an assassination attempt on Queen Elizabeth II during a state visit to the US. Goofy? Certainly. But the gag rate of six-a-minute feels much needed right now - even if some miss by a mile, at least a few will hit the target. Silence your inner critic, sit back and enjoy.

15 of the best horror movies on Netflix