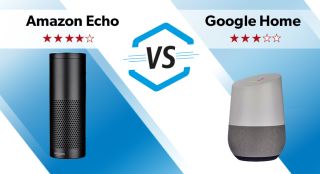 Amazon and Google are vying for control of your home. So which of these two company’s voice-controlled speaker offerings should you buy – the Amazon Echo or Google Home? We’ve tested both at length, comparing and contrasting what each offers and how it performs.

In our initial reviews, we awarded the Echo four stars, and the Home three. On the face of it, then, a win for Amazon.

But it’s not quite as straightforward as that. The Echo can do things that Google Home can’t, and vice versa. So which one is for you will depend somewhat on your priorities.

Google Home is smaller and lighter than the taller, cylindrical Amazon Echo, and looks a bit like a large white air freshener. It’s a minimalist design, with a touch-sensitive circle on the top for adjusting volume and pausing/playing music.

A series of coloured lights illuminate when the device is active, and there’s a mute button to turn the two microphones off. To personalise the device, you can add one of the optional coloured bases, either fabric (£18) or metal (£36). Inside the unit is a 5cm speaker and a pair of 5cm passive radiators.

By contrast, the Amazon Echo is an upright, cylindrical speaker, available in black or white finishes. While not exactly screaming high-end desirability, it is easy enough on the eye and feels solidly built by the standards of £150 wireless speakers.

Inside the Echo there are seven microphones, alongside technology ensuring your commands are heard and for the speaker to work out which is nearer to you. We find the Echo slightly better at understanding our requests than the Home, which may be down to its more numerous mics.

You can adjust the Echo’s volume simply by turning the volume 'ring’ on the top, which we find much easier to use than the less precise method touch-sensitive volume control on top of the Home.

Both devices are straightforward to set up. Download their respective apps, connect them to your home wi-fi network, and you’ll be up and running in a couple of minutes.

Connecting each system to Spotify is done through the ‘Music’ section in each app, while adding Philips Hue lighting system is simply a matter of going into the smart home/home control section of the app and syncing it to the Hue Bridge.

Overall there are few snags, but the one surprising glitch we hit with Google Home is: it won’t connect to our work Google calendar. A quick Google search (the irony!) reveals we are far from alone.

It turns out Home can’t handle work Google accounts, only personal ones, which is rather annoying – the Echo had no problems connecting to it at all.

What’s more, Amazon’s search assistant Alexa allows you to add events to your calendar with a simple voice command, whereas Home does not. Google appears to have missed a trick here.

Amazon stole a march on Google with the launch last year of the Echo and Echo Dot (an Echo without the built-in speaker). Already there are plans to integrate Alexa into around 1000 products, including high-profile brands like Bose and Sonos.

Having only launched its Home device in the UK in April, Google lags behind - it has fewer apps (or ‘skills’ as Amazon calls them). In fact, Alexa now has more than 10,000 'skills' while Google Home only has around 160 'services'. For now, Google Home lacks support for popular apps such as Hive, Uber and National Rail, and also has to make do without Bluetooth streaming (which the Echo has).

But Home is compatible with Spotify, Google Play Music (UK buyers get a free three-month trial), Deezer, 7 Digital, Musixmatch and BBC iPlayer, and you can add songs via voice to your library or a specific playlist on Spotify (although oddly you can't do the same with Google's own Play Music service).

As for video, Google Home will work via Chromecast with YouTube, Facebook, Netflix, BT Sport, Now TV and My5.

Those video/TV channels highlight one strong advantage of Google Home – it will work with any Chromecast-enabled device as well, so if you have a Chromecast audio or video dongle attached to your music or TV system, you can use voice commands to control it.

And just recently Onkyo and Pioneer have announced a firmware upgrade to bring Google Home voice control to a range of their AV receivers, home cinema systems and network speakers, along with Chromecast audio streaming.

We add a Chromecast Ultra to our Samsung TV and Google Home has no trouble connecting with it, and confidently follows our commands to cast YouTube videos directly to the TV from an iPad. Funnily enough, the first video it chooses to show is Amazon Echo vs Google Home - no prizes for guessing which one wins!

You can also stream music directly from your phone or tablet to the Home using Chromecast-compatible apps, of which there are plenty. Spotify Connect is part of the package.

And when it comes to smart home functionality, Google Home features Philips Hue, Samsung SmartThings, Nest thermostats, IFTTT (If This Then That) and Wemo devices too.

If you already have a good audio system, it’s worth considering the affordable Amazon Echo Dot (£50), which is basically the autonomous top part of the full-size Echo.

It looks like a small puck, can connect via its 3.5mm output to the analogue input on your existing set-up, and gives all the voice-control functionality of Alexa through your existing audio system.

For this test, we connect an Echo Dot to our Sonos ConnectAmp using a standard 3.5mm-to-RCA cable.

By selecting the line-level input on the Sonos amp we are able to stream Spotify and internet radio from the Dot through multiple Sonos zones simultaneously, and use voice commands to select music and pause and play tracks.

Of course that’s with a wired connection. The official Alexa/Sonos integration, due later this year, should provide wireless connectivity and voice control using an Alexa ‘skill’ (app). Even more convenient.

And the Echo has Bluetooth built in, so you can also connect it wirelessly to any other Bluetooth speaker. We do so using a UE Roll, which means audio from the Echo is output through the UE Roll while retaining the Alexa functionality of the Echo to select music and increase/decrease volume.

However, when it comes to the issue of pairing and multi-room capability, Amazon lets the side down. You can’t connect two Echos together to make a stereo pair, nor can you group speakers in different rooms together to create a proper multi-room audio system. Google Home can do both those things.

So surely that’s a win for Google? Well, yes and no. In practice, its stereo/multi-room functionality has a few issues.

Set up a stereo pair in one room, for example, and ask them to play some classical music from Spotify. Each speaker starts playing a different piece of music. To get them to sync together, playing the same music in stereo, you have to select the grouped pair through an app such as Spotify Connect.

And if you have a multi-room system, it will only respond to the speaker you are nearest to at the time. So if you want them all to play the same music throughout the house, again you’ll have to go through the relevant control app.

It’s not a deal-breaker, but it does mean the voice-control integration is not quite as seamless as you might expect.

But of course, these devices are about more than playing music. Voice control is where they really come into their own. Ask them any question you like, and they will dig into their massive online databases to try and find the answer.

The default wake-up word for Echo is ‘Alexa’ (you can change it to 'Amazon' if you prefer), while for the Home it’s ‘Hey Google’ or ‘Okay Google’.

We have to say we prefer the sound of Alexa’s voice to that of Google Home which, although it has a British accent, sounds a bit mechanical to our ears.

Still, want the latest news from, say, The Guardian or Daily Telegraph? No problem. Ask them about the weather, traffic, sports or to set an alarm, and they will duly oblige. Traffic information on Google Home is basic – when asked how to get from London to Harrogate, the reply is “take the M1”.

If you want a recipe for a cake, the nearest petrol station or to hear a joke, they will do their utmost. You can even order goods through Amazon’s '1-click' service and have them delivered directly to your door. Google Express, which offers a similar service in the US, isn’t available yet in the UK.

We set Spotify as our default music service on both systems, and voice searches for a variety of artists and albums proved to be no problem.

Neither the Echo nor Home should be considered true hi-fi systems, despite Google’s claim the Home “delivers crystal-clear highs and rich bass for hi-fi sound that streams over wi-fi”.

Given its relatively compact dimensions, Google Home sounds fine for background listening, but you’ll get far better performance from a Sonos Play:1 (£190) or even an £80 UE Roll Bluetooth speaker.

A 50mm driver and a pair of similarly-sized passive radiators in the Home’s base can only do so much. There’s a thin, bright edge to the treble and wooliness to the bass that disappoints. And don’t expect a huge amount in terms of detail, definition and dynamics.

The Amazon Echo is better, but still doesn’t sound as good as similarly-priced wireless speakers like the Monitor Audio Airstream S150 and multi-room capable Sonos Play:1.

Listening to music via Spotify, the Echo speaker plays it safe at both ends of the sonic spectrum. You avoid any unwanted harshness in the treble, but you don’t get a whole lot of bass depth either.

It’s also worth noting you can only play songs from Spotify on one Echo at a time – ask a second one to do so and the first one stops playing.

The speaker goes reasonably loud, but turn it up too high and you’re more likely to get the speaker itself shaking than any room-shaking bass.

It’s a tricky one. We wouldn’t recommend either Amazon Echo or Google Home as your primary music system, but if you want to add voice control to your smart home, and need a simple speaker for background listening in the kitchen or bedroom, then each has its place.

Despite its multi-room capability, Google Home currently lags behind Amazon Echo in the range of services it offers and feels like it’s playing catch-up.

Plus the Echo Dot is an affordable way to add voice control to your existing system. We also think the full-size Echo sounds better. So, for now, our vote goes to Amazon.

AGAINST: Sound is nothing special; relies on other apps and devices to make the most of it

VERDICT: So-so sound, but the Alexa assistant makes this a seriously clever speaker

FOR: Simple to use; unobtrusive design; works with Chromecast; multi-room capability; stereo pairing

VERDICT: Google has arrived late to the voice-controlled assistant party, and has some catching up to do