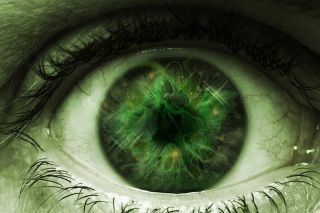 If you're looking to scare yourself silly this weekend but aren't prepared with a host of spine-chilling Blu-rays and DVDs, we have just the thing.

We've picked out a selection of the best scary movies around for your viewing 'pleasure' and they're all available on Netflix, ensuring you you can sit through as many as you can bear (so long as you've got a subscription).

If you were making a list of film characters you wouldn’t want to be stuck in a lift with, Annie Wilkes (Kathy Bates) would be on it.

In this harrowing Stephen King adaptation, the reclusive psychopath saves her favourite novelist Paul Sheldon (James Caan) from a car crash - only to hold him captive in her house and torture him until he re-writes the damned fate of her favourite character.

Jumpiest Moment: Misery is more of a slow burner than full of cheap-boo frights, but ol’ Wilkes sure has a thing for popping up out of the blue when you least expect it.

As eerie as its title suggests, this horror film follows a writer (Ethan Hawke) who finds a selection of 8mm movies in his new home, which show a series of murders that happened there decades earlier.

It’s not without the usual horror tricks, but the story is imaginative and driven by an element of mystery that you can really sink your teeth into. It’s pretty frightening, and littered with horrific images that’ll have you grabbing for a pillow.

Jumpiest Moment: A real ‘gotcha’ scene involving a lawnmower. You don’t see it coming until it’s too late: you’ve already jumped off the sofa and spilt your popcorn.

Remember those? This horror anthology follows a bunch of kids hired to break into someone’s house and retrieve a particular video. As they trawl threw the towers of tapes, they’re treated to six bizarre and horrific recordings – each making up a segment of the film.

Found footage films are often more miss than hit, but V/H/S is one of the few triumphs. Though some segments are better than others, there are plenty of genuine scares, original stories and inventive executions to enjoy. If you like it, it now has a (slightly inferior) sequel: V/H/S 2, would you believe.

Jumpiest Moment: A classic webcam scene (one of contemporary horror’s most popular tropes) where dead silence and a blank room is interrupted by a sudden flash of some unknown entity. And a scream.

A stylish and truly terrifying home invasion horror that sees a family reunion turn into a bloody occasion as animal-masked intruders invade their house.

A high-paced, action-packed thrill ride, You’re Next plays on the it-could-happen-to-anyone fear and relishes in gory effects and tension so thick you could cut it with a knife. If you're feeling the pace, some well-integrated comedic moments give you momentary breathers from the terror.

Jumpiest Moment: When an arrow is suddenly shot through the window into one of the guest’s eyes. Just before dessert.

A heavy rainstorm sees Ed (John Cusack) and nine strangers (including Ray Liotta) stranded in a motel in Nevada. It’s all going swimmingly until they get picked off one by one…

Perhaps better branded as a mystery thriller, Identity is nevertheless really scary stuff, and a far cry from the just-another-serial-killer-movie stamp suggested by its synopsis. Worthy of genius status thanks to a central twist (you won’t see it coming), it’s a must-see product of tight, imaginative writing and decent direction. Just excuse the acting.

Jumpiest Moment: Either of the two car crashes. Both very different, but equally heart-stopping

The original, obviously - though the sub-par 2013 remake is in the Netflix catalogue too. It’s another Stephen King adaptation; this time a classic high-school horror about a timid young girl who is taunted by her classmates – until she realises she has telekinetic powers and can use them to enact revenge in a most satisfying way.

For the film’s majority, the most horrific moments are Carrie’s scoldings from her religious nut of a mother. But the blood-infused end payout is certainly worth the wait. Blood-thirsty fans, prepare yourselves: there’s (literally) buckets of the red stuff.

You’ll probably know it as ‘Chucky’ – you know, the creepy knife-wielding doll in dungarees. Before being shot down by cops in a toy store, a notorious serial killer goes through a voodoo ritual to transfer his soul into a doll – a doll that is given to six-year-old Andy for his birthday and comes alive to carry on killing.

Apart from conjuring one of the most memorable villains in horror, this first installation of the five-strong franchise is an entertaining mix of petrifying and playful, shocking and silly – a must-watch to scream (and laugh) along to.

Jumpiest Moment: When Andy’s mum realises the all-talking, all-dancing doll doesn’t have any batteries in... Creepy.

A new type of horror movie when it was released and one that’s been copied to death since, The Blair Witch Project is arguably the scariest movie of the 90s.

Presented in an unnervingly raw and real, black-and-white 16mm format, the mock-doc film is the recovered material from three students who ventured deep into the woods to research the legendary ‘Blair Witch’ incidents years earlier.

Then-original and taking bump-in-the-night to new extremes, this adrenalin-pumping supernatural horror gives you nowhere to hide. And is not suitable for the heart-fainted.

Jumpiest Moment: Not really a ‘jumpy’ movie, but one where every rustle of a leaf brings you closer to the edge of your seat.

If cheap thrills aren’t your thing, this Austrian psychological horror might well be the ticket. Two sociopathic young men, Paul and Peter, hold a family hostage in their own vacation home and put them through hell, playing sadistic games to satisfy their own amusement.

There’s much more to this film than meets the eye: engaging, well acted and cleverly blurring the lines between fiction and reality, Funny Games is a violent flick that’ll keep you highly-strung until its shocking end.

Jumpiest Moment: When the mother suddenly grabs the gun and shoots at her captors.

The classic of all classics. After being attacked by a werewolf on a backpacking holiday around Britain with his friend, David (David Naughton) must wait until the next full moon to realise his fate.

An original, off-beat take on the well-worn werewolf movie, this entertaining horror comedy is a ‘just right’ blend of funny and frightening. Plus, everyone should witness the most groundbreaking human-to-werewolf transformation (bone-cracking and skin-splitting aplenty) in cinematic history.

Jumpiest Moment: When David awakes from a nightmare about being attacked by Nazi monsters...

If you’re after a vampire tale that’s not all sparkly-skinned heart-throbs with bizarre special powers, this Swedish adaptation (it’s subtitled) of John Ajvide Lindqvist’s eponymous novel is just the ticket.

One of the darkest yet most moving examples of gothic horror, this sweet story about bullied young boy Oscar who develops a romantic friendship with a vampire girl Eli is a bloodsucker like no other.

Jumpiest Moment: In one of the movie’s most tense and well-executed scenes, Eli unexpectedly plunges into the pool to enact her revenge.

As iconic as they come, this classic vampire movie is cheesy, hammy and clichéd up to its eyeballs – but definitely worth your time.

Starring Roddy McDowall as a wickedly funny vampire hunter tracked down by teenager Charley Brewster to help him prove his next-door neighbour is a vampire, Fright Night is a lot of fun.

Special effects are spectacular for the time (if a little dated now), the classic 80s synth score is memorable, and Chris Sarandon as the vampire-in-question is perfectly charming.

The 90s wasn’t a great decade for sci-fi horror, but this underrated B-movie about a group of astronauts who go into space to salvage a long lost starship and, of course, find more than they bargained for is one of the better ones.

It’s no Alien, and might not have the most original or stylish plot, but Event Horizon generally succeeds as a nightmarish flick chock full of gore and with low-budget charm.

Jumpiest Moment: The start of the film’s ‘hell’ scene as Captain Miller’s disturbing hallucinations explode onto the screen.