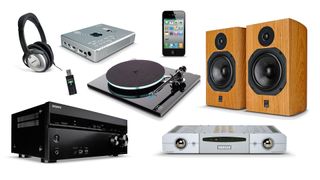 When we initially decided to write this feature, we drew up a first draft list featuring more than 30 products. Whittling that down to the ten products we have here wasn’t easy.

In the end, those included either had to have dominated their market sector for years on end, or make such a profound impression that they changed their market in some fundamental way.

There are plenty of others we could have included (we couldn't settle on one specific TV, for example), but we think the ten here represent some of the very best AV products this decade has produced.

Okay, we don't want to get off on the wrong foot, but we’re cheating a little here. The Bose QuietComfort 15s were first reviewed in November 2009, but they made such an impact on the following decade we just had to include them.

Back then there wasn’t much of a choice for those wanting a great-sounding pair of headphones with noise-cancelling features. Bose ignited the market with the QuietComfort 15s and blazed a trail that the rest of the industry then rushed to follow.

What made these headphones so good? Most impressive was the quality of the noise-cancelling. They silenced the outside world, rendering the drone of planes and trains to a minimum. It was almost eerie how successfully the headphones did this.

But that wouldn’t count for much if they weren’t comfortable. The QuietComfort 15s were light, sensibly shaped and durable. Add class-leading sound to the list and it’s easy to understand why they became so successful.

There were iPhones before the iPhone 4, but none that marked the transition of the smartphone from being a basic utility item to a luxury supercomputer quite as persuasively. This thing was beautifully crafted with just the right blend of luxury and futurism dialled into the styling.

At the time Android was still playing catch-up, so nothing on the market could match the iPhone’s slick operation or the range of apps on offer. Most importantly, it outclassed everything else in its performance, from the way it displayed videos to the quality of sound. The iPhone 4 set the template for the premium smartphones we use today.

It says much for the abilities of Roksan’s Caspian M2 amplifier that almost a decade on from its introduction we still think it’s one of the best at its price point.

Even by today’s standards, the M2 has a combination of excellent build quality and superlative sound that more than justifies its price. No wonder it won multiple What Hi-Fi? Awards.

The Caspian’s feature set dates it more than anything. This is an analogue line-level integrated amplifier with nothing in the way of digital inputs, streaming functionality or even a phono stage.

However, if you can live with the basic functionality, you’ll struggle to find an alternative at this level that delivers so much in the way of dynamic expression, insight or rhythmic coherence. The Caspian M2 remains a class product.

AudioQuest’s Dragonfly wasn’t the first USB DAC, however, it was the first one to do its job so delightfully and so effortlessly. We can still remember the excitement as we unpacked this tiny unit, which was no bigger than a USB memory stick, and discovered that it delivered a proper hi-fi performance for just £215.

Even at the time, we thought this was a small amount of money for something that could decode hi-res audio files up to 24-bit/96kHz. In fact, we rated the original Dragonfly so highly it picked up our top DAC Product of the Year Award for 2012.

Times have changed of course, and the current base Dragonfly can be yours for under £100 ($100) and still manages to sound notably better. But the original set the template for modern portable USB DACs.

It stripped back the feature count and concentrated on the bare essentials, and the payback was significantly better sound from your computer. Later versions had reduced power needs that meant smartphone use was on the menu too.

Better sound on the move? That original Dragonfly was one of the foundation stones for that to happen.

The first generation of ATC SCM11s would certainly find a place among the previous decade’s greatest hits, but these Mk IIs took performance to a notably higher level. You can thank the new in-house manufactured soft-dome tweeter and the classier curved cabinets.

The main point of distinction between these speakers and their rivals is the use of a sealed cabinet – you’ll search in vain for a reflex port here. This suggests that the quality should be better, even though the quantity of bass may take a hit.

But the ATCs matched class rivals in low-frequency quantity while bettering all-comers when it came to detail, dynamics and rhythmic ability. These monitors went on to dominate their price point at our Awards for the next five years and remain first-class contenders, even today.

The original Chord Hugo was something of a left-field product. It was a premium-priced, portable, battery-powered DAC that was made by a tiny UK-based high-end electronics specialist better known for producing exotic pre/power combinations.

But somehow the Hugo was an outstanding success, not only setting new sonic standards for portable audio, but also embarrassing pretty much every similarly priced domestic number-cruncher on the market in the process.

The heart of this and every current Chord DAC remains the use of an FPGA (Field Programmable Gate Array) loaded with proprietary software that handles all the digital processes the DAC has to do.

This method, rather than using off-the-shelf chips, gives Chord a massive amount of control over how the music signal is handled and the result, in this case, was quality of sound that the competition just could not match.

In our opinion, the original Hugo was bettered only by the MkII version introduced four years later. Few hi-fi products have shaken up an entire section of the market in the same manner that the original one did though.

Rega had been making electronics for decades when the Elex-R was introduced. At the time, we liked the company’s amps, particularly the cheaper Brio, but few of the more premium offerings left a mark.

The release of the Elex-R changed that. It looked functional, as Rega’s products tend to, and apart from a phono stage, didn’t have much to shout about in terms of features. But, once we started listening it was clear that this unassuming box was good enough to beat the established class leaders.

The Elex-R, still in production, remains a wonderfully musical product with all we want from a premium integrated amp. There’s solid build and enough power to drive any price compatible speaker to high levels. There’s plenty of dynamic thrust and rhythmic coherence to keep us entertained. Compared with this amplifier, most of the opposition still seems lifeless and lacking in subtlety.

This hi-fi lark hasn’t really changed much over the decades. If people want high performance, the answer usually lies in multiple rectangular electronic boxes connected to a pair of wood-cased passive speakers. When the KEF LS50 Wireless was introduced it showed another way.

Here was a set-up that could challenge the very best traditional solutions in sound quality but packed everything into just two classy wireless speaker boxes. They’re not totally wireless of course. You still have mains cables for each channel and a wire connecting them.

That aside, the LS50 Wirelesses show a way forward where performance and practicality intersect, leaving a neat and clutter-free way to enjoy a high-quality audio performance.

We can’t think of another product that has dominated its market as comprehensively as the Rega Planar 3. Introduced in the late 1970s, it has remained the go-to middlemarket turntable since then.

The design’s simplicity, robust build and exceptional performance continue to prove an irresistible blend for buyers and a diffcult nut for the competition to crack.

It may look the same as ever, but Rega has steadily evolved the deck over the years to the point where every aspect of the design has changed multiple times. The current Planar 3, introduced in 2016, marked one of the bigger changes with improvements across the board from plinth to tone arm.

The result is that it still sounds like a Planar 3 but much better. Such are the Rega’s talents that we can’t help but feel sorry for its competition.

The Sony STR-DN1080 AV receiver is something of a superstar. On launch it outperformed its rivals to an almost embarrassing degree but, as the years have passed and newer rivals started to close in on the performance, Sony dropped its price to such a degree that it remains an unbeatable proposition.

This multi-channel amplifier remains a terrific sounding device. It delivers insight and agility that still isn’t bettered by any rival. Watch Star Wars and you’re immersed right in the heart of the battle, with huge dynamic swings and loads of punch to explosions.

Switch to something that requires more delicacy and it’s happy to oblige with impressive low-level detail and a handling of nuances that still makes most rivals seem ham-fisted. We can’t think of an AV amp that has impressed us so much over the past decade.